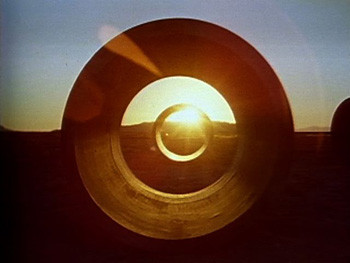 "Land artists try to find modes of expression that go beyond the traditional canvas. No longer the painted image of a landscape, but the landscape itself or the landscaped marked by the artist becomes the actual art object. The triangle in which art up until now has played out-studio, gallery, collector-is exploded." (Gerry Schum)

During the late 1960s, in the context of minimal art and process art an interest developed in work that was located outside the studio and art institutions. Work in exterior spaces is typical of land art, also called "earthworks" or "earth art." The term "landscape" here encompasses urban and industrial or natural landscapes. Although land art is usually site-specific, it includes sculptural interventions of the most various kinds: excavations of soil in the work of Michael Heizer, Nancy Holt's concrete tunnels, a path in the grass by Richard Long, sound in the work of Dennis Oppenheim, or Hamish Fulton's fleeting, immediate experience of walking. Often, these interventions in the landscape are subject to the effects of wind and weather in an enduring process of transformation.

On view here are objects, drawings, films, photographs, maps, and print matter from the holdings of the Nationalgalerie, Kupferstichkabinett, and the Kunstbibliothek der Staatlichen Mussen zu Berlin, as well as from the Marzona Collection and Friedrich Christian Flick Collection at Hamburger Bahnhof.