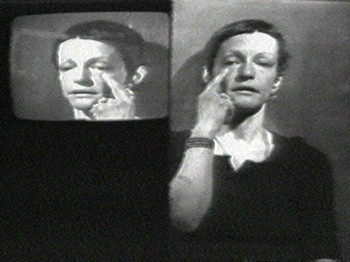 From the beginning of the 1970s, gallerist, collector and artist Mike Steiner was one of the earliest proponents of the young medium of video art in West Germany. Inspired by several trips to New York, where he came into contact with developments in video and action art, he opened the Studiogalerie in the vicinity of Berlin's Kurfürstendamm in 1976. The gallery soon became one of the defining exhibition spaces for Berlin media artists, who had received little attention before, as well as presenting international pioneers in video art and performance.

The exhibition "Live to Tape" presents a selection of works from the Mike Steiner Collection in the Nationalgalerie holdings spanning the years 1972-1985. It traces directions in early video art; in particular, the relationship between live performance and video is brought into focus as in taped endurance performances that test the physical limits of the body by Marina Abramović, Charlemagne Palestine and Ulrike Rosenbach. Also on view is a group of works from the rarely shown action Hotel Room Event, organized by Fluxus artist Ben Vautier and Mike Steiner. During the event fifteen artist videos were taped in different rooms of the Hotel Steiner. Another highlight is Ulay's spectacular action There is a Criminal Touch to Art (1976), documenting his temporary theft of the Carl Spitzweg painting The Poor Poet (1839) from the Neue Nationalgalerie.