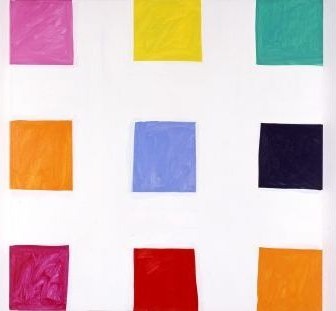 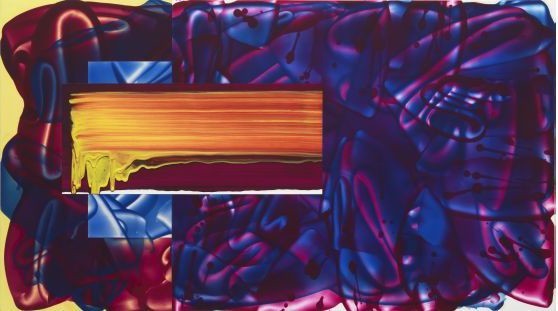 Two By Two marks the first joint exhibition of New York-based artists ­Mary Heilmann (b. 1940, San Francisco) and David Reed (b. 1946, San Diego). The show has been conceived specially for Hamburger Bahnhof and presents forty paintings and installative works created since the 1970s.
Both artists are key figures in American painting post-Abstract Expressionism. In the early 1970s they re-established abstract painting outside its traditional boundaries between figuration and abstraction and embraced narrative and emotion.
Mary Heilmann, who trained as a sculptress, investigates gaps and blind spots in modernism's world view. She infuses her oeuvre with personal memories not only through her dialogue with the works and stylistic principles of abstraction, but also through her choice of titles, which evoke associations and reminiscences. Heilmann's formal vocabulary references that of De Stijl, Constructivism and Minimal Art.

While Heilmann's colours and titles conjure the lifestyle and mood of the Sunshine State of California and the Beat and surfing generation, the works by David Reed convey the aura of Hollywood and the fascination of cinema via the visual language of film. Reed's primary aim is to explore the "identity of painting". Within his canvases, the interface between colour fields cannot be clearly defined and their relationship to one another raises questions. Reed's works reflect his investigation of different tendencies in art and his enthusiasm for the painting of past epochs. Gestural movements, a palette rich in contrasts, and extremely long and narrow formats are the primary characteristics of his oeuvre.
For Two By Two, Mary Heilmann and David Reed are entering into a temporary partnership in order to explore the areas of mutual enrichment, tension and common ground between their respective artistic positions.

The exhibition is accompanied by a publication.

The exhibition has been made possible by the Verein der Freunde der Nationalgalerie.
www.smb.museum/museen-einrichtungen/hamburger-bahnhof/home.html