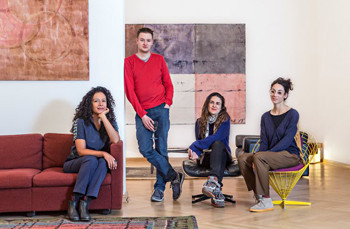 On 29 August 2013 is the opening of this year's exhibition celebrating the Preis der Nationalgalerie für junge Kunst (prize for young art). In this group show, the four nominated artists Kerstin Brätsch, Mariana Castillo Deball, Simon Denny and Haris Epaminonda each present examples of their work until 12 January 2014.

The decision as to the 2013 winner will be announced at the award-ceremony on 19 September at the Hamburger Bahnhof - Museum für Gegenwart - Berlin (Museum for Contemporary Art).

Since this year, the prize consists in a solo exhibition presented by the Nationalgalerie in one of it's six houses. This exhibition takes place for the first time in 2014.

This autumn, the prize will be awarded for the seventh time in it's history. Ever since the founding in 2000, the prize has been promoting important positions of contemporary art and supporting young artists living and working in Germany.
www.smb.museum/museen-einrichtungen/hamburger-bahnhof/home.html