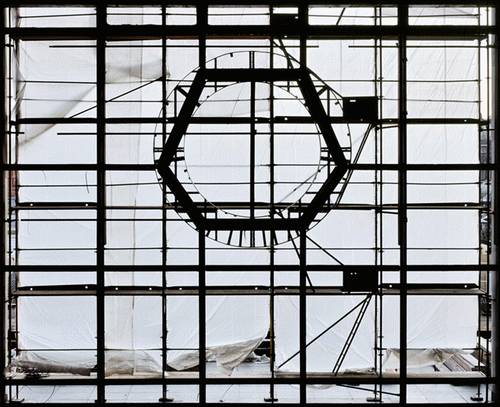 Only a naked, steel skeleton in the middle of the city is still reminiscent of Berlin’s Palast der Republik – of that building, which opened with great pomp in 1976 as the “People’s Palace of the German Democratic Republic,” was then closed for a long period after the fall of the Berlin Wall because of asbestos, and now is finally to be torn down after its inspired “interim use.” The great symbolism of the structure has challenged a series of important artists to create works based specifically on this building. In a type of artistic stocktaking, the French artist Sophie Calle previously documented the “removal” of GDR symbols in 1996. One of her works shows the demontage of the GDR crest on the Palast der Republik. The British artist Tacita Dean used the shimmering reflections on its rust-colored façade as a point of reference for making a film that links the building with light into a poetry of abstraction. Not without irony, the Berlin artists’ team Nina Fischer & Maroan el Sani rebuilt the Palast as a small-scale model, which they renamed “Club of the Republic,” recalling the much used restaurants and dance clubs formerly found in the so-called “GDR Cultural Palace.” Finally, Thomas Florschuetz photographed the ruin of the building in March of this year. What came about is an entire series of impressive, large-scale works that, like the views onto the large surfaces of the windows upon which Berlin’s emblems appear in silhouette, equally captures the force of the architecture itself.