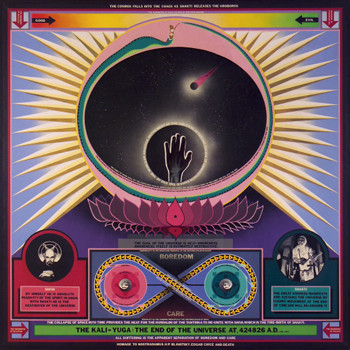 In an exhibition series entitled secret universe, the Hamburger Bahnhof is dedicating itself to artists who have largely gone unnoticed within the established art discourse and will feature them in monographic projects.

The second exhibition in this series presents works by the American artist and architect Paul Laffoley (*1940). Since the mid-1960s, Laffoley has confronted scientific, philosophical and spiritual matters in his work with equal verve. He studied art history, history, philosophy and architecture and spent more than 38 years living in a one-room apartment in Boston, which he dubbed the 'Boston Visionary Cell'. He is influenced in his work by his collaboration with the visionary architect Frederick Kiesler, as well as by the theories of Buckminster Fuller and C.G. Jung and the literature of Johann Wolfgang Goethe and William Blake. Another factor that has left a mark on his work is the fact that Laffoley was once engaged by Andy Warhol to watch television through the night on his behalf so that he could keep abreast of events.

In his mostly large-scale works on canvas, Paul Laffoley devises complex theories and fantastical scenarios on time travel, the 4th or 5th dimension and cosmological and astrological questions. In accomplishing this, he creates diagrams, display charts or rigidly geometrically structured compositions in which text and image are woven together to form a whole. Underlying his elaborately structured paintings are multi-layered reflections, covering several disciplines at once, which he first lays down in writing before transposing them to a pictorial form. Since 1966, his work has been presented in numerous solo and group shows in the USA, South America and Europe. Today's exhibition in the Hamburger Bahnhof is the first solo show in Europe of the artist who still lives in Boston.

The 'secret universe' series has been made possible by the 'About Change, Stiftung'.