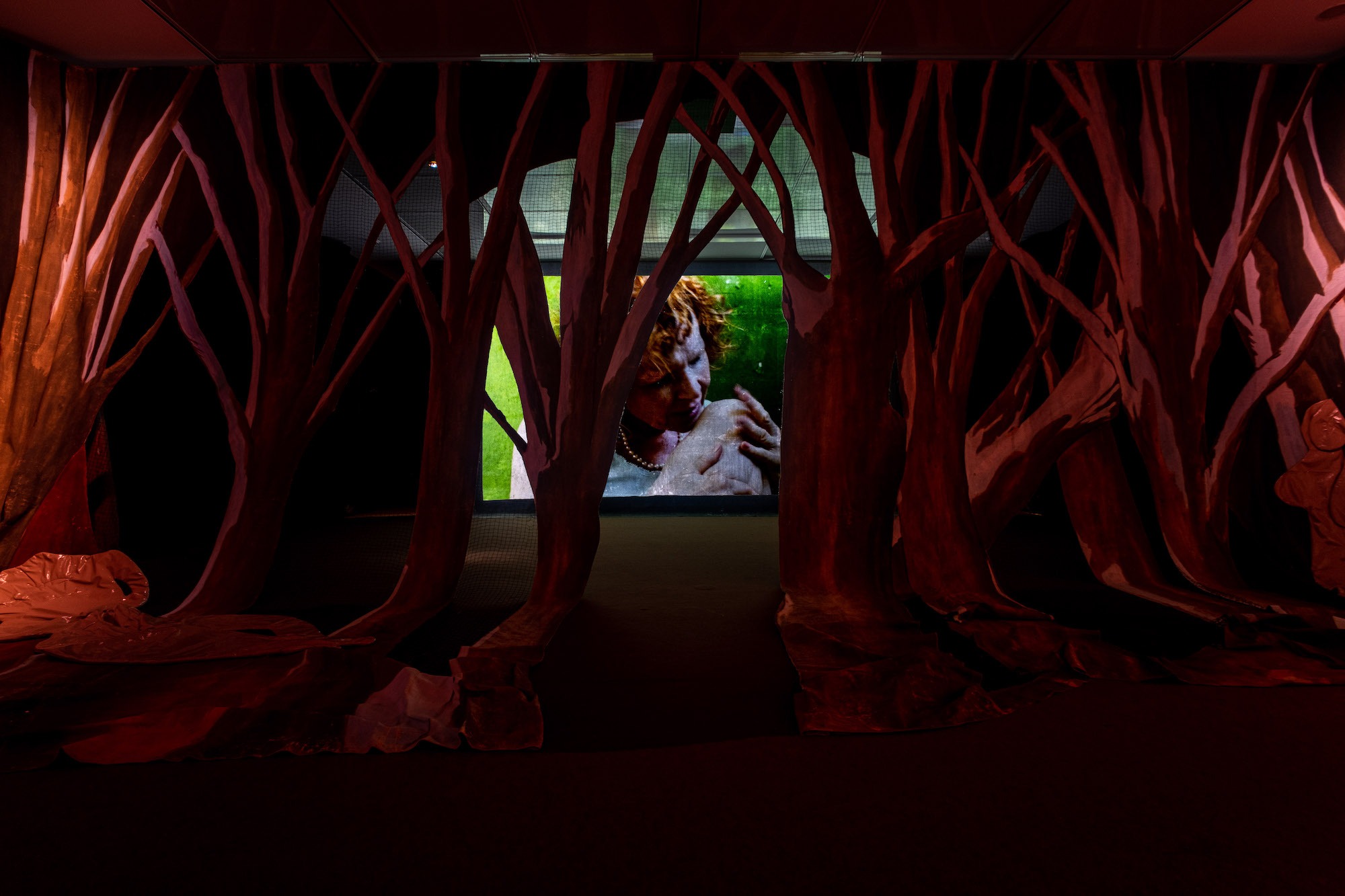 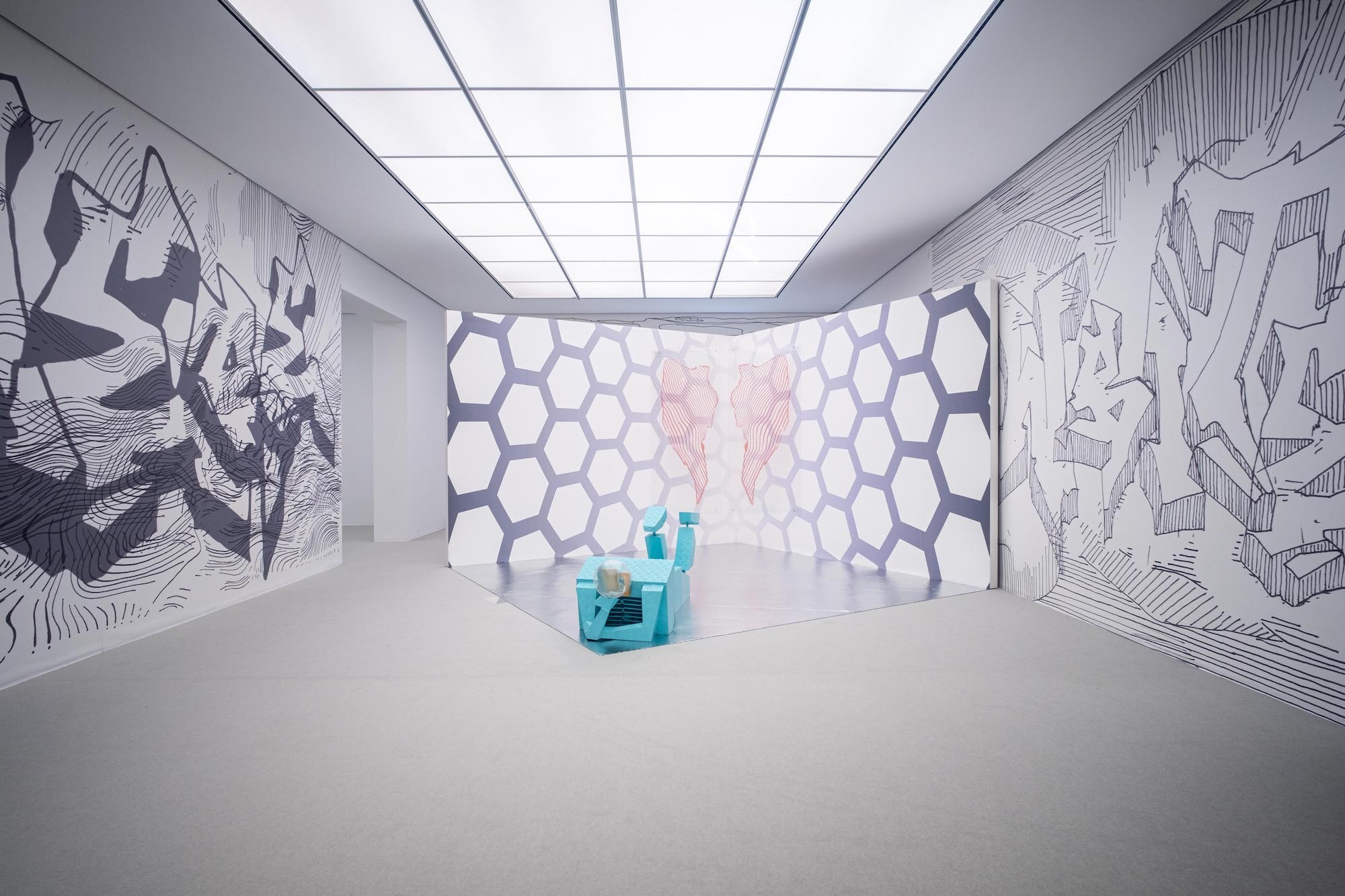 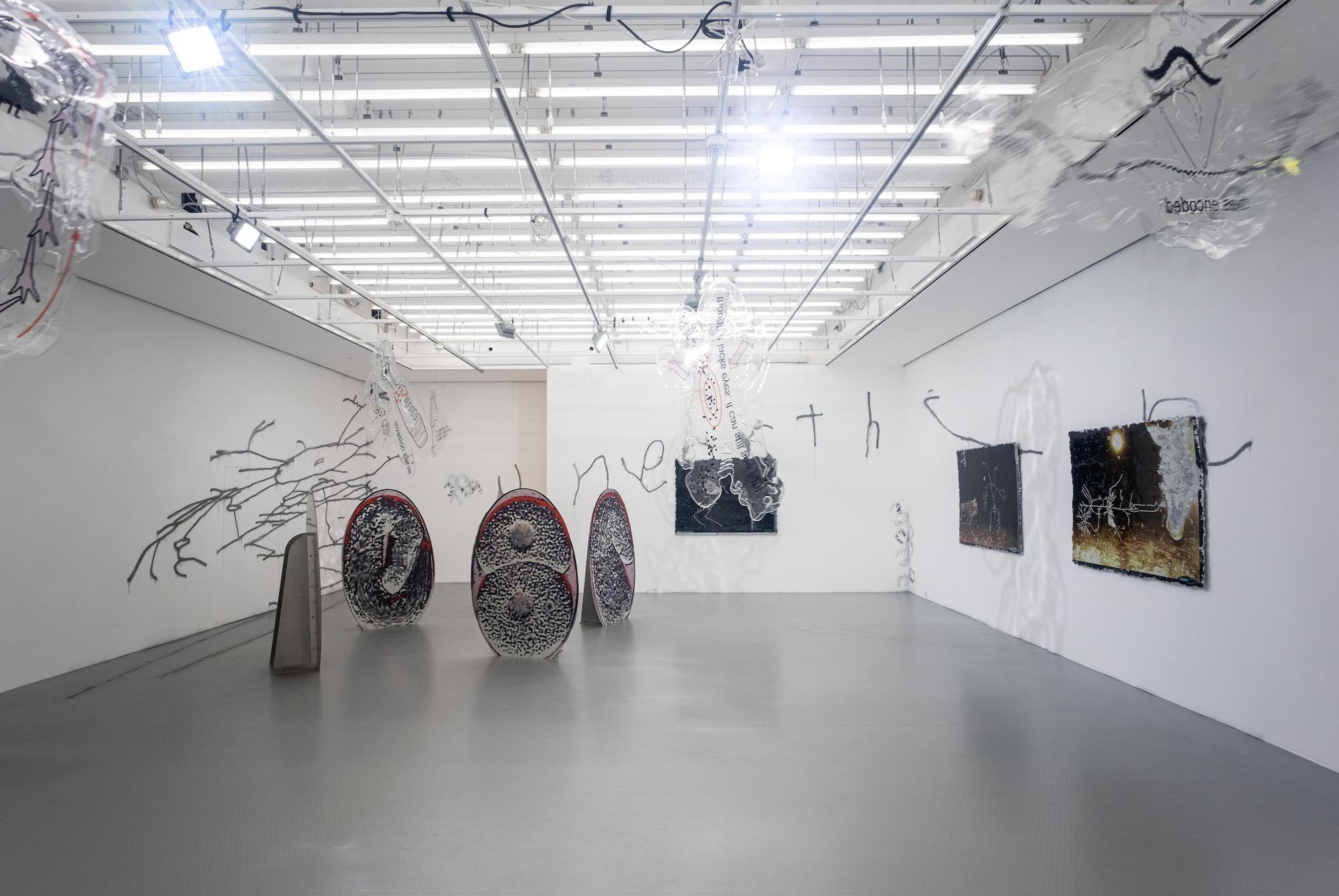 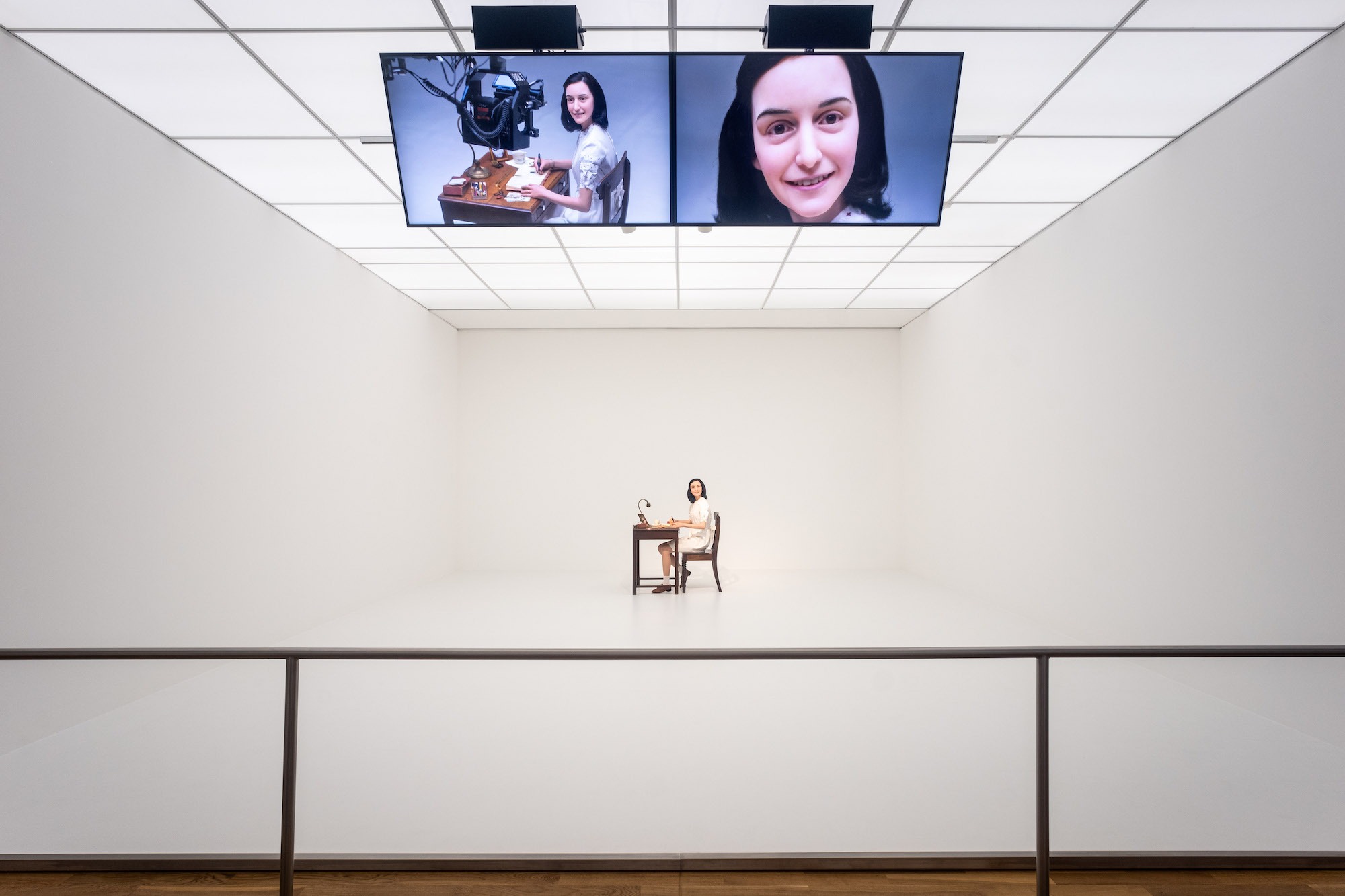 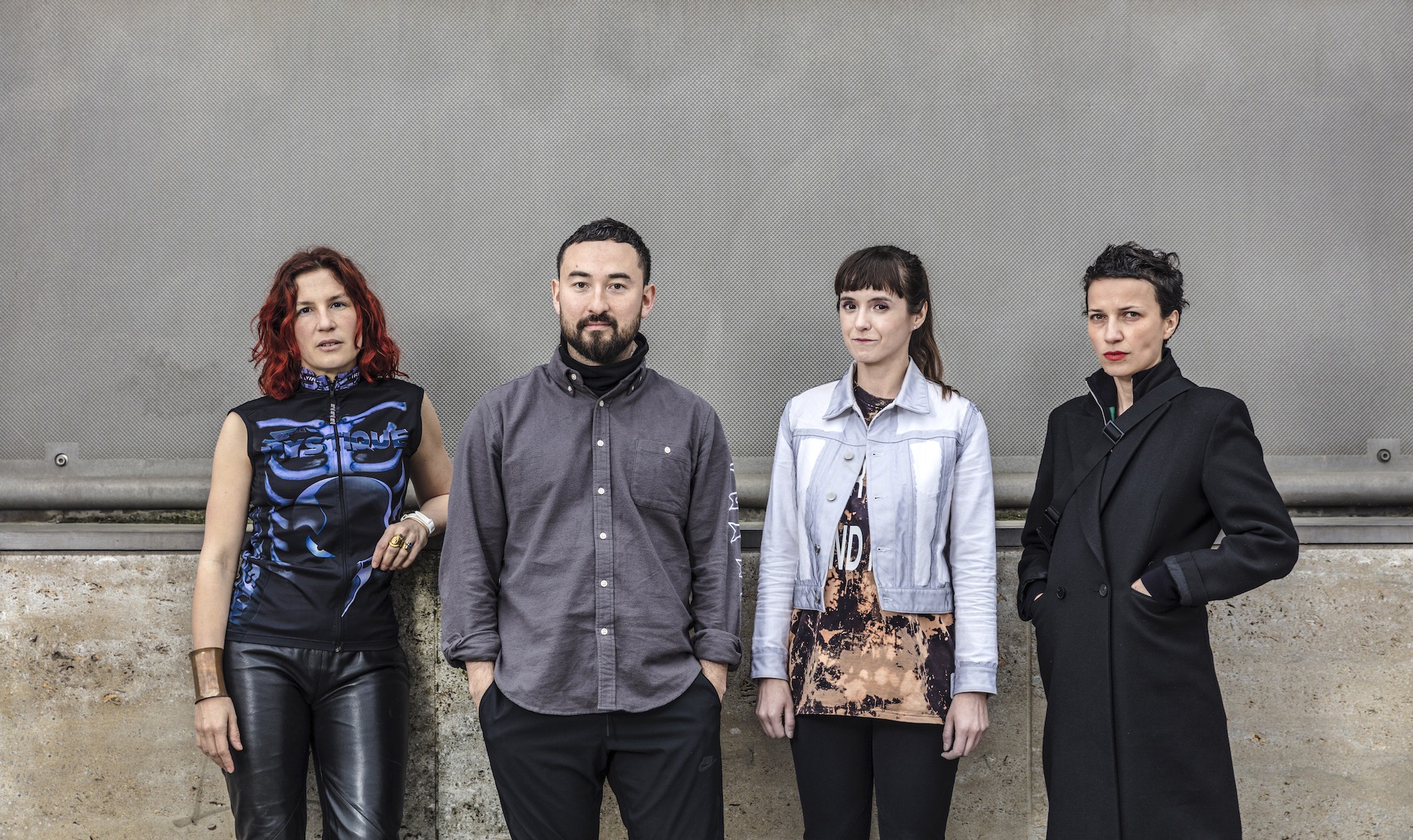 This March, Pauline Curnier Jardin (born 1980 in Marseille), Simon Fujiwara (born 1982 in London), Flaka Haliti (born 1982 in Pristina) and Katja Novitskova (born 1984 in Tallinn) have been nominated for the Preis der Nationalgalerie 2019 by an international jury. The museum prize is awarded every two years and pays tribute to artists under 40 who live and work in Germany. The four artists will be presented in a joint exhibition at the Hamburger Bahnhof – Museum für Gegenwart – Berlin from August 16, 2019 to February 16, 2020. All four artists show spatial ensembles in which they combine existing and new works. The tonality and handwriting of the four spatial work presentations is very different; what they have in common is an explicit reference to aspects of our contemporary European society.

With her transgressive artistic approach, which combines visual and narrative elements of theatre and cinema, Pauline Curnier Jardin creates a stage space. In this walk-in installation, cinematic and sculptural work intermesh in Curnier Jardin’s characteristic manner. Her composition of the two films Explosion Ma Baby (2016) and the new production Qu'un Sang Impure as well as the sculptural work Peaux de Dame in the Hot Flashes Forrest (2019) create a wild web around desire and reproduction.

In the shortlist exhibition, Simon Fujiwara presents a compilation of four works that stem from his investigation of contemporary mass phenomena and their economic, socio-political, and media aspects. The very different works illustrate the extent to which these phenomena have an emotional component of their own. The video installation Likeness (2018) focuses on the figure of Anne Frank and her media-effective staging and instrumentalization.

Flaka Haliti continues her two series Its urgency got lost in reverse (while being in constant delay) and Is it you, Joe? for the exhibition. Two colorful idle robots, composed of materials from abandoned KFOR field camps in Kosovo – the discarded pieces of a peace process – are juxtaposed by the artist with the transformable figure of Joe, who has accompanied her since 2015 as a difficult to grasp alter ego. In the staging that shapes the entire space, the two groups of works are just as much interlocked as they rub against each other.

Katja Novitskova became known as one of the pioneers of an artistic lan- guage called "Post-Internet Art". For the shortlist exhibition, she creates a virtuoso, multi-part and multi-layered "environment" of sculptural ele- ments, murals and projections of various kinds. Here, too, the works in the overall installation form a common, closely interlocking structure. The works are based on Novitskova's interest in current research in biotech- nology and revolve around the question of the future existence of the or- ganic as a component of technological processes.

An international jury will choose the prizewinner on September 12, 2019. The award consists of a solo exhibition with a catalogue at Hamburger Bahnhof – Museum für Gegenwart – Berlin in the fall of 2020. The jury consists of: Annie Fletcher (Director of IMMA – Irish Museum of Modern Art, Dublin), Anna-Catharina Gebbers (Curator at Hamburger Bahnhof – Museum für Gegenwart – Berlin), Udo Kittelmann (Director of Nationalga- lerie – Staatliche Museen zu Berlin), Philippe Vergne (Director of Ser- ralves Museum of Contemporary Art, Porto) and Theodora Vischer (Senior Curator of Fondation Beyeler, Basel). Also on September 12, this year's winner of the Förderpreis für Filmkunst, which the Nationalgalerie has been awarding together with the German Film Academy since 2011 and which includes a prize money of 10,000 euros, will be announced.