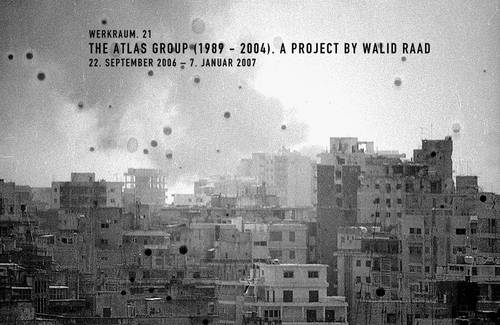 The Nationalgalerie im Hamburger Bahnhof – Museum für Gegenwart – Berlin is to present the first large solo exhibition of The Atlas Group. The Atlas Group was founded by Walid Raad (b. 1967 in Chbanieh/Lebanon) in 1999 to research and document the contemporary history of Lebanon, in particular the years of the civil war (1975-1990). The Archive set up by The Atlas Group focuses on found and produced photographic, audiovisual, and written documents of everyday life in Lebanon. These include snapshots from the private albums of the (fictive) Lebanese historian Dr. Fadl Fakhouri or the videotapes of Souheil Bachar, who together with five Americans (allegedly) was a hostage in Beirut in 1985 (Hostage: The Bachar Tapes (#17 and #31), 2000). Everyday experience of the civil war is ever present without being explicitly represented, such as in the series of engines which are found scattered throughout Beirut after the detonation of car bombs, or in Walid Raad’s own photographs of the Israeli invasion into Lebanon in 1982 (We Decided To Let Them Say, “We Are Convinced,” Twice, 2002). Walid Raad’s works are characterized by an aura of the documentary while fracturing it at the same time. Because the authenticity of the written, pictorial, and audiovisual document is always queried, with The Atlas Group project Walid Raad is also continually posing the question how history – in particular one marked by the trauma of a civil war as in Lebanon – can be told and represented.

Walid Raad lives in New York and Beirut. He is a member of the Fondation Arabe pour l’Image (FAI) in Beirut, founded in 1996, and his work has been presented at Documenta 11 and the 2003 Venice Biennale. Besides photographs and videos, so-called lectures (live performances) are an important medium of his artistic practice. From October 24–26, Walid Raad will present the lecture “I feel a great desire to meet the masses once again” at the HAU 2, Hallesches Ufer 32, 10963 Berlin (at 8 p.m., in English).