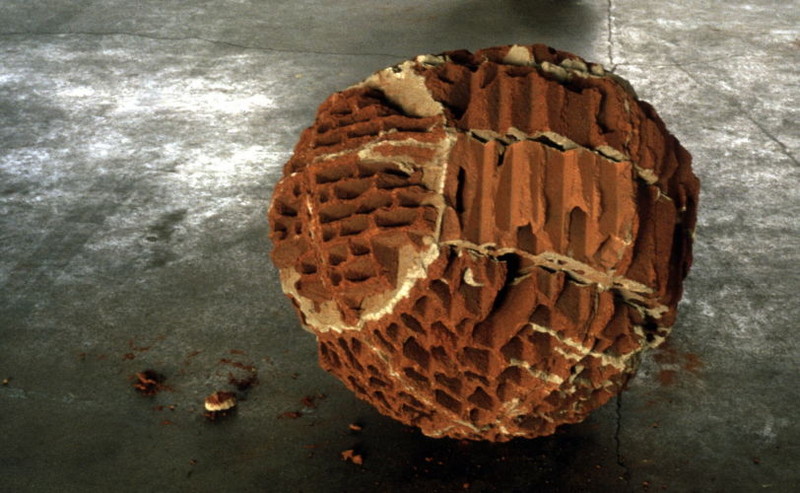 Annette Wehrmann (1961–2010) took part in the renewed politicisation of art since the 1990s. She employed strategies of self-organisation to develop a highly individual artistic stance – located somewhere between sculpture and intervention ­– that drew upon methods of conceptual and action art as well as the language of the Situationist International. Using ephemeral and cheap materials, she produced objects that explore critical tensions around major socio-political issues, dealing with topics such as money, religion, the brain, thinking, the city, the state, television and language.
In her project Ort des Gegen (Place of Opposition), Wehrmann sought out empty spaces within the public sphere that could be charged with individual forms of personal resistance: "The ORT DES GEGEN is a site of fracture for purposeless negation, in particular for the aimless passing of time, materialised in the increase/accumulation of waste. It lies somewhere between coming to a standstill and radical liberation," as the artist herself once described it. With the generous support of the Freunde der Kunsthalle, a group of works by Annette Wehrmann, consisting of oversized brick 'footballs', drawings, and videos of actions, has been acquired for the Hamburger Kunsthalle's permanent collection, and is being presented here for the first time.
The exhibition accompanies the award of the Edwin-Scharff-Preis 2012 to the 'Freundeskreis Ort des Gegen' in Annette Wehrmann's honour.
www.hamburger-kunsthalle.de