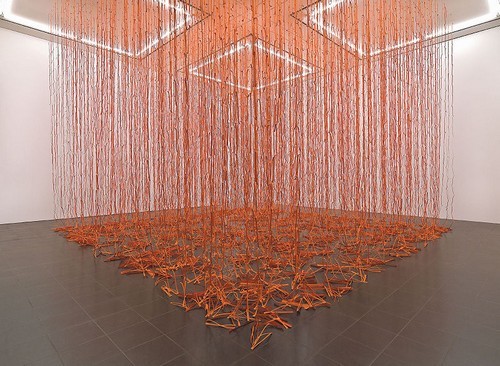 Scherenschnitte, or “paper cuts,” have reemerged as a highly relevant trend in contemporary art in recent years. What is interesting are the different ways in which artists deal with form and content within the “cutout” medium: Many experiment with unusual techniques and materials, using them to conquer three- dimensional space. They emancipate cutouts from the pure, flat surface, rendering them a spatial or sculptural object. Cut. Scherenschnitte 1970-2010 is the Kunsthalle’s first exhibition dedicated exclusively to contemporary cutouts.

The cutouts of Romantic German painter Philipp Otto Runge (1777-1810) have been an important influ- ence for many young artists. Inspired by his ideas of giving the viewer space for his or her imagination through the simplification and abstraction of technically perfect paper silhouettes, cutouts have developed into an artistic medium in their own right. In his ornamental designs, Olaf Nicolai (*1962) takes up the ten- sion between nature and construction in the style of Runge. Silhouettes by Felix Droese (*1950) and Kara Walker (*1967) only appear idyllic and romantic – a closer look reveals them as images of violence and political aggression, consciously undermining the viewer’s expectations of a traditional cutout. Walker’s room-filling wall projections are full of allegorical scenes that attack American racism, while William Kentridge (*1955) investigates the ways in which our mind projects figurative images onto shadowy out- lines. Charlotte McGowan-Griffin’s (*1975) large format cutouts ironically bring together the cutout’s fairy- tale aspects and the surreal work of the obscure.

The exhibition runs parallel to Kosmos Runge, the large Philipp Otto Runge retrospective at the Ham- burger Kunsthalle. Cut sets a conscious focus on young artists that show a new approach to the cutout medium in dialogue with literature and theater. Many of the artists will create new works for the exhibition, which will include approximately 50 works from the years 1970-2010.

The exhibition is accompanied by a catalogue that will be available at museum shops and www.freunde- der-kunsthalle.de.