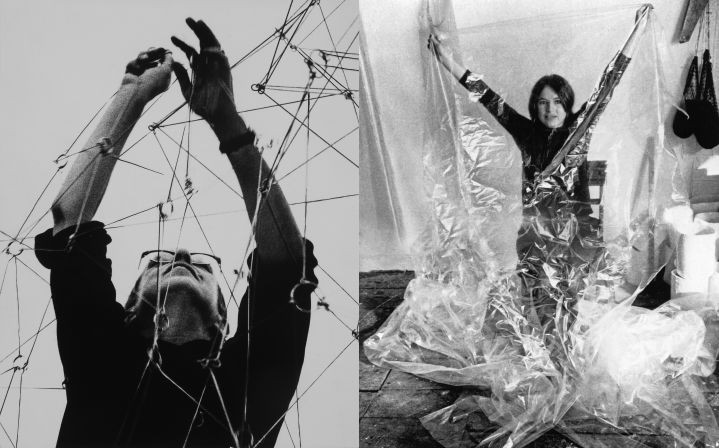 These concurrent exhibitions create a dialogue between two Hamburg-born and internationally renowned artists: Eva Hesse (1936–1970) and Gertrud Goldschmidt, known professionally as Gego (1912–1994). Hesse and Gego are regarded as pioneers of spatial installation, and also in the use of non-traditional materials in an artistic context. This parallel presentation – the first of its kind – is being shown on two floors of the Galerie der Gegenwart and includes around 170 works in a wide range of media: drawing, collage, painting and sculpture.
The sculptural and graphic work of both artists shows a skilful handling of space, a fascinating lightness of touch and a marked linearity. The exhibitions reveal further parallels and connections between the two, such as their experimental use of materials and found objects (Eva Hesse worked with unconventional modern materials such as polyester, fibreglass and latex, while Gego incorporated everyday items such as clothes hangers and metal springs into her sculptural objects), but the joint presentation also highlights their highly individual responses to questions of form. Although comparisons between Eva Hesse's and Gego's art have occasionally been made in catalogue texts and articles, this is the first time their work has been presented together on this scale. Some surprising parallels can also be found in the biographies of the two artists. The fact that both Gego and Eva Hesse were born in Hamburg is not widely known, even among specialists in the field of art, as the two women emigrated to different continents in 1939. As a small child, Hesse moved with her family to North America (New York City), while Gego started a new life in South America (Caracas/Venezuela), where she went on to build an international reputation. Influenced by her background in architecture, Gego's artistic oeuvre evolved in response to neo-Constructivist movements in Latin American art. Eva Hesse's works often evoked organic or anthropomorphic forms, but at the same time they reflected her innovative and highly distinctive approach to Minimalism and 'object art'.
www.hamburger-kunsthalle.de