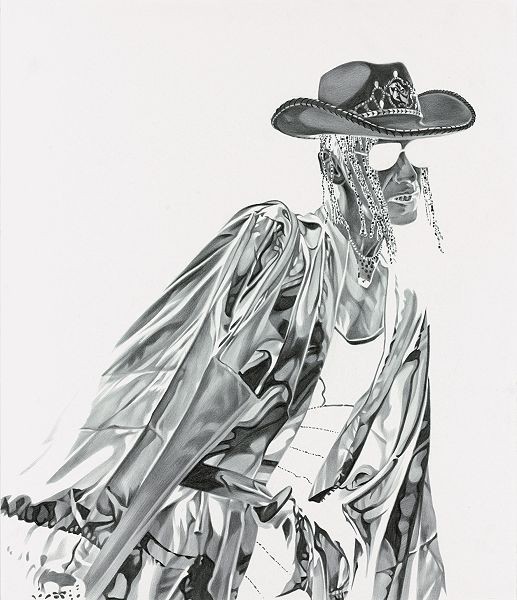 Berlin-based artist Marc Brandenburg (born 1965) has recently emerged as one of the best-known draftsmen of his generation. Influenced by the pop and punk culture of the 1960s and 80s, Brandenburg’s graphite drawings document Berlin’s subversive nightlife, portraits of friends or extremely zoomed-in details of banal, ordinary objects. Brandenburg is fascinated by the velocity and movement in the scene images of today, but also the simplicity and beauty of a laconic Christmas ball, for example, or a fairground carousel. He deliberately makes use of these fast images only to freeze them, in black and white, by means of a lengthy, obsessive drawing process. Brandenburg draws from his own photos and images from magazines, which he distorts using a photocopier, converts to negative images with the computer and then traces.
These reversals have a stunning effect: portraits or images distorted to the point of abstraction take on an intensity and sharpness that alienates the subject while lending them a ruthless precision at the same time. Nevertheless, Brandenburg does not believe in the power of the ultimate, singular image – instead he often hangs his drawings close together in a manner that resembles film sequences. According to Brandenburg, it is through this series of images that a dialogue emerges between the individual pictures: “It’s about what cannot be depicted; it’s about the aura, the spaces in between.”
www.hamburger-kunsthalle.de