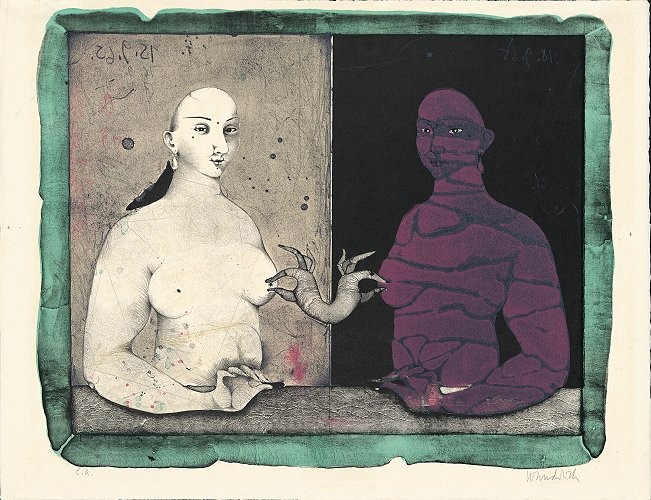 There has not been a solo exhibition of Paul Wunderlich in Hamburg until now.
This presentation of the artists' lithographs at the Hamburger Kunsthalle intends to fill this gap. Until his death in 2010, Wunderlich was among the artists in the city who enjoyed a high international reputation. Clearly, Wunderlich's career had an early start. Even as a student at the Hamburg Academy of Visual Arts, he was made director of the graphic arts workshop, where he printed for Emil Nolde and Oskar Kokoschka and introduced his colleague Horst Janssen to the art of etching. The scandal surrounding his "qui s'explique" lithography rocketed Wunderlich to fame and secured him a place in the collection of the Museum of Modern Art in New York. In his lifetime, Wunderlich was also the only German artist to be admitted to the exclusive "Académie des Beaux-Arts" in Paris.
The exhibition was organized on the occasion of a generous donation by the Berlin art dealer Dieter Brusberg, who recently contributed a large portfolio of Wunderlich lithographs to the Hamburger Kunsthalle collection. Because the collection concentrates on a specific period of time - namely Wunderlich's early lithographs - the exhibition ends with works created in 1975. This allows for a selective look at the artist's early period, on the development of Wunderlich's unmistakeable signature and on until now unpublished lithographs showing the influence of other artists. The show also includes all of the artist's most significant early lithograph series, notably "qui s'explique" and "20 July 1944". The presentation will be supplemented with etchings and oil paintings, which highlight Wunderlich's position as one of the groundbreaking German illustrators since the 1960s.
www.hamburger-kunsthalle.de