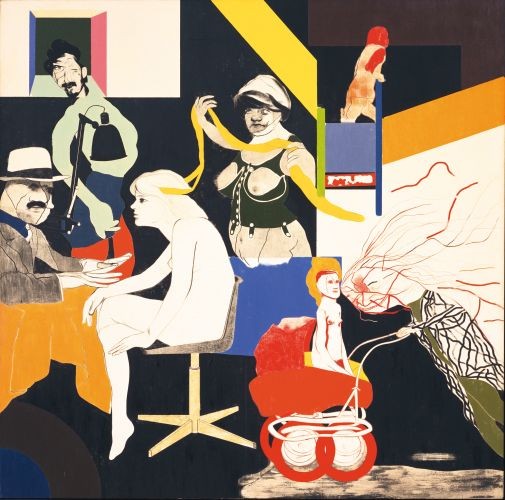 R. B. Kitaj's enigmatic artworks are sometimes considered to be cryptic, complex and provocative. In this impressive display – the first comprehensive retrospective of the American artist's work since his death five years ago – many of the elements, sources and stimuli that make up his compositions are revealed and illuminated. This was made possible by exclusive access to Kitaj's extensive personal archive of texts and images, which served as a great source of inspiration for his paintings and collages, and was opened up for the first time for this exhibition. The retrospective survey shows how Kitaj's search for his Jewish identity can be compared to an artistic investigation into the conditions of 20th-century existence, marked by alienation, the loss of heimat and of existential certainties. Kitaj invented and developed the notion of 'artistic diasporism' as a form of self-assertion beyond any concept of nation, religion or ideology: "utterly American, longingly Jewish, School of London, I spin my years away from both my heartlands (...) in the diaspora I discovered that one is free to dare anything; in many other places this is not possible." Around 130 paintings, prints and drawings have been gathered together for this exhibition, with loans from leading international museums and private collections such as the MoMa, the Tate and the Thyssen-Bornemisza Collection. Works from every period – and hence every genre – of Kitaj's consistently surprising oeuvre will be represented in this major retrospective: from the first paintings of the late 1950s to the largely forgotten material collages (created in collaboration with Eduardo Paolozzi) and screenprints of the 1960s, right through to the late Los Angeles pictures. The Hamburg edition of the exhibition, which has its first showing at the Jewish Museum in Berlin, has an additional focus on the artist's close links to the city and the Hamburg school of art history. Particular emphasis is placed here on Aby Warburg, whose principles of comparative iconography had a strong influence on Kitaj's painting from his student days at Oxford onwards.
A retrospective by the Hamburger Kunsthalle and the Jewish Museum Berlin in cooperation with Kulturprojekte Berlin GmbH.
www.hamburger-kunsthalle.de