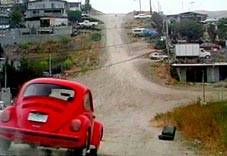 Video art has long since been embraced by the museum. The medium’s conservatorial features raise new questions relating to legal aspects of video’s use and dissemination. In terms of content, however, the thematic issues spawned by the particular character of this technical medium are in danger of being marginalized. The Hamburger Kunsthalle is now redressing this imbalance by showing a selection of outstanding new acquisitions from its video art collection, supplemented by loans of several well-known works.

‘SNAFU. Media, myths, mind control’ is an exhibition about the fundamental breakdown of understanding within hierarchical structures of communication. Central themes of liberalization such as emancipation, drug-induced experience, youth culture, rock and pop, the sexual revolution and the struggle for liberation are all entangled in insoluble contradictions. This mess can be well described as ‘snafu’. In military jargon the acronym ‘snafu’ stands for a principle stating that decisions made within command structures tend to lose their grasp on reality and exacerbate erroneous developments – resulting in ‘Situation Normal: All Fucked Up’. The phrase was fittingly coined by American soldiers during the Second World War. In the course of the 1970s it emerged as common parlance for the political and military situation in Vietnam. In his novel, ‘The Illuminatus! Trilogy’ (1975), Robert Anton Wilson turned the term into a cornerstone of his esoteric conspiracy theory.

The exhibition ‘SNAFU. Media, myths, mind control’ sets a thematic focus ranging from film works from the mid-sixties to video installations and video films of the present. One aspect linking all the exhibits is the question of how means of communication are deployed and what consequences follow from such formations. Three of the works shown here provide a historical frame of reference for all the other exhibits.

In his filmic interpretations of Otto Mühl’s Viennese ‘material actions’, Kurt Kren (1929–1998) explored the realm of pictorial memory with an extremely rapid montage of cut-up sequences. His visual overloading assaults the viewer with physical immediacy. Around the same time, in April 1966, Andy Warhol and his Factory entourage were experimenting in the New York disco ‘The Dom’ with light shows, film projections and stroboscopic effects to accompany the music performed by Velvet Underground. With its drug excesses and sensory over-stimulation, the happening called ‘Exploding Plastic Inevitable’ became the first-ever psychedelic multimedia show in the world. The filmmaker Ronald Nameth has composed a cinematic homage to this Pop event: his ‘Exploding Plastic Inevitable’ offers testimony to developments from the 1940s to the 1960s, a period in which the horizons of science, art and technology appeared to open up in all directions. Lutz Dammbeck has compiled a study of the links between military behavioural research, LSD experiments, the invention of the Internet and scientific cybernetics. One element of his wide-ranging research is his replica of the backwoods cabin inhabited by the reclusive Ted Kaczynski, also known as the ‘Unabomber’. The installation documents the drug experiments performed by the US military in the 1960s, Ken Kesey’s ‘Acid Tests’ and the ‘Merry Pranksters’, and the mind-control experiments undertaken at Harvard University called ‘Multiform Assessments of Men’.

Towards the end of the 1960s artists appropriated video as a new medium of image and sound, going against the grain of its function as a technology of control. Its use in an artistic context, its development into a mass medium and the invention of the music clip were largely responsible for the ‘blurring’ between art and popular culture. ‘SNAFU’ establishes visual correspondences between diverse artistic works, yet without prescribing answers to the complex question of possible avenues of communication. The exhibition challenges the viewer to choose his or her own path in pursuit of successful communication.