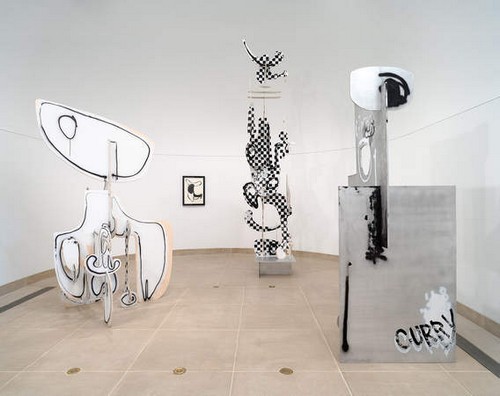 Aaron Curry, a young sculptor working in Los Angeles, premiers new sculptures made for the Vault Gallery at the Hammer Museum. Curry’s sculptures combine references to a range of other artists from Pablo Picasso to Isamu Noguchi to David Smith with aspects of Surrealism, tribal art and American popular culture. For the new works being made for the Hammer exhibition, Curry explores aspects of camouflage used during World War I, leading to a confusion of depth perception, and the loss of definition of complex biomorphic forms. This is Curry’s first solo museum exhibition.

About the Exhibition
By Michael Ned Holte

Curry’s body of work circumscribes such sculpture, as well as gestural paintings on paper that oscillate between abstraction and anthropomorphism, deft collages that often locate occurrences of “primitivism” in everyday culture, and resin-coated shards of cardboard that defy categorization while casually leaning against the wall like scrappier versions of John McCracken’s planks. In Curry’s earliest exhibited efforts, a handful of familiar modernist tropes—biomorphic abstraction, surrealist trompe l’oeil, disjunctive collage—encountered a who’s who of pop culture, including a ghetto fabulous Christina Aguilera pretty in pink, Tim Allen as the Shaggy Dog, hip-hop empress Kimora Lee Simmons, Star Trek’s Klingon Worf, country-and-western rabble-rouser Toby Keith, and the computer-generated version of Garfield the Cat, all summoned via movie posters and other found images, many slathered with resin and serving as low bases for sculptures. Still, pop culture and the concerns of “high” art were never at odds in Curry’s works, but just the opposite: these camps were in cahoots from the beginning. Of course, modern art’s history is, and has always been, a refracted history of common culture, from Edouard Manet’s fondness for the flatness of advertising, to Pablo Picasso’s incorporation of newspapers into his collages, to Willem de Kooning’s lusty studies of Marilyn Monroe to, well, pop art. So if what’s referred to—in reverent tones—as The Popular has, at first glance, disappeared from Curry’s work in the past year or so, a closer look should suggest that a complex intertwining of cultural signifiers has in fact become more fully subsumed—or mashed up—into the very DNA of his figurative assemblies. In other words, it’s increasingly hard to tell where E.T. ends and Max Ernst begins.
Curry furthers a lineage of artists who have radically rearticulated the figure—another motley crew that includes Ernst, Miró, Fernand Léger, Mad magazine’s Basil Wolverton, Henry Moore, Peter Saul, the Hairy Who’s Karl Wirsum (one of Curry’s undergraduate professors at the School of the Art Institute of Chicago), peers Brian Calvin and Thomas Houseago, and graduate faculty mentors Richard Hawkins and Mike Kelley at Art Center College of Design in Pasadena. It seems worth noting that Curry encountered Saul’s radioactive work in a Chicago gallery window after hours and was instantly hooked—a decade or so before the elder artist’s belated reconsideration by the art world—returning faithfully for each of the painter’s subsequent shows. (Perhaps it’s also worth noting Curry eventually met Saul and Mike Kelley at the same time—in a Los Angeles bar during Curry’s first semester in grad school.) Despite the significant and valuable contributions of art historians, the history of art is fluid, slippery; it’s constantly being rewritten by artists who, with a measured disregard for teleological cause-and-effect, often draw out unanticipated connections that bum-rush perceived borders and topple established hierarchies.
In Curry’s work the figure is always emerging from or slipping into nonrepresentation; with his sculptures, and especially with his paintings on paper, he exploits a viewer’s desire to anthropomorphize abstraction. In his 2006 solo debut at David Kordansky Gallery in Los Angeles, a series of three modulated gray paintings were accompanied by a smaller example in pink and red, collectively titled Hobo Head Rig (Bank 1, 2, 3, 4). Confronting each one of these works, a viewer might reasonably ask, “Is this accumulation of brushstrokes and spray-painted lines covered with tiny beads of sweat . . . a face?” Sometimes the answer is clearly yes but not always. Curry has frequently reiterated this format since, in increasingly lurid color combinations—purple, turquoise, and brown; hot pink, bright blue, and purple—that often cue other, similarly hued elements in a given exhibition. In another ongoing, inversely related series, black-and-white, portraitlike images of classical statues, such as the two heads in Image in Form (1, 2) (2006), are obfuscated toward abstraction with repetitive accumulations of gouache brushstrokes.
The cognitive complexity of Curry’s wall-bound works increases exponentially with his sculptures, with plywood and aluminum panels acting as vehicles for surface play, illusion, confusion. See, for example, his recent sculpture Pixelator (Infinite Mask) (2008), with its black-and-white checkerboard pattern, which simultaneously alludes to Picasso’s harlequins, Photoshop, and the geometric, “razzle-dazzle” camouflage applied to boats during World War I—the last of which influenced French soldier Léger’s machine aesthetic. Razzle-dazzle was not used to disguise approaching ships, but to generate confusion, disrupting spatial perception to make them a difficult target—much like the surface of Pixelator. A number of subsequent sculptures have relied on a looser approach, with an efficient white spray-painted line that articulates body parts—almondlike eyes, skeletal bones, rubbery fingers—within the black plywood planes, like a startlingly precise doodle. Such tactics exploit the plasticity of these sculptural forms, heightening the drama for the circling viewer as two dimensions become three before collapsing into flatness again as a figure emerges and disappears from sight. Despite genetic imprints that point backward to various art historical forerunners—and even their primitive ancestors—these pileups are new templates for a present in which the body can be and often is modified part by part and constructed sign by sign.
www.hammer.ucla.edu