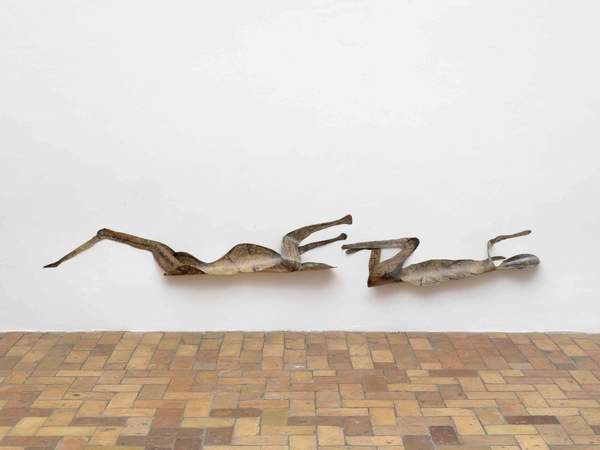 Transient figures and intangible forms dwell in the work of Enrico David. They retain a graphic quality as they transition from spontaneous sketches on paper to paintings, sculptures, and other media. This installation takes its cue from a singular figure modeled in bronze around a hollow animal bone and bound to a protruding blade. The statuette is like an anthropomorphic pocketknife that embodies both permanence, through its molded outlines, and ephemerality, through its gaping cavity. Around it, paper mummies crawl across the wall, haunting silhouettes peer out of canvases, and ethereal profiles delineate see-through metal screens. The infinite shifts and vortexes of David’s underworld are evoked in the dark tunnels of a painting and the repetitive loops of a handcrafted tapestry. Groundless images and vacuous gazes exude a sense of unease in the visitor, who is at once observer and participant in a staged scene. Its components recall the miscellaneous displays of regional arts and crafts museums, but they could also be props for a Surrealist set. Organized by Allegra Pesenti, curator, Grunwald Center for the Graphic Arts.