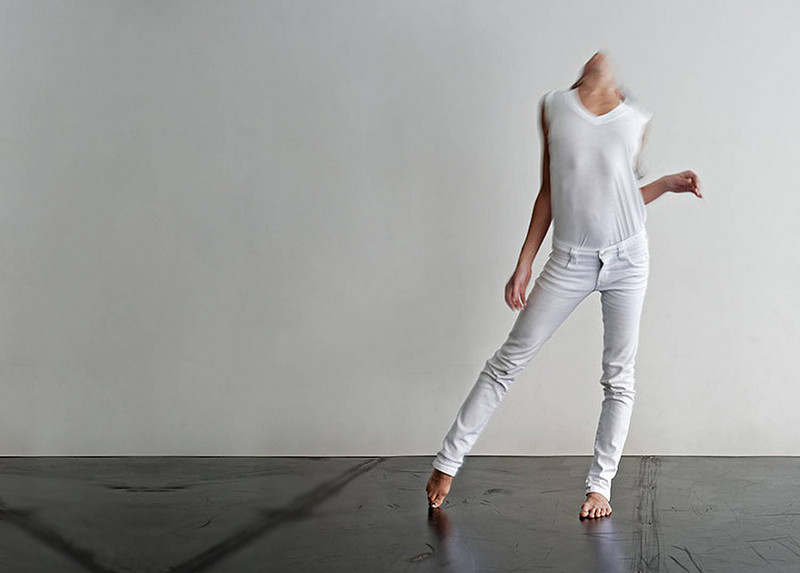 The artist and choreographer Maria Hassabi’s performances and live installations of the past decade have been described as explorations of stillness, slowness, and sustained movement. Even more so, her works—produced for galleries, theaters, and public spaces—address the separation between the spectacular and the everyday, between subject and object, between performer and audience. Her extended-length choreographies often require dancers to move slowly, sustain positions, and hold poses while performing in a variety of contexts. In INTERMISSION—first presented as part of the Cypriot and Lithuanian Pavilion at the Venice Biennale in 2013—Hassabi and two other dancers performed continuously for consecutive days in a cavernous gymnasium that housed the exhibition, becoming part of a tableau that included the work of other artists and the bodies of visitors. Hassabi’s PREMIERE, which debuted in 2013 at the Kitchen in New York, similarly addressed the expectations of viewership by calling attention to beginnings and endings in performance-based works. Extending over eighty-three minutes, PREMIERE pitted the rapt attention of a seated audience against five dancers performing a slow rotational turn. The length of the work was determined by the time it took for the performers, who started out with their backs to the audience, to turn 180 degrees in order to face the onlookers.

In PLASTIC, presented here for the first time, Hassabi expands these themes to relate specifically to the spatial conditions of the Hammer Museum and the disparate conventions of display within the performing and visual arts. Throughout the duration of the exhibition, her performers continuously enact a form of live installation in the gallery and the museum’s outdoor spaces, bridging the conceptual and physical divide between performer and object, bystander and viewer, while addressing the ways in which dance and the spectacle of performance are presented in theatrical and exhibition contexts.