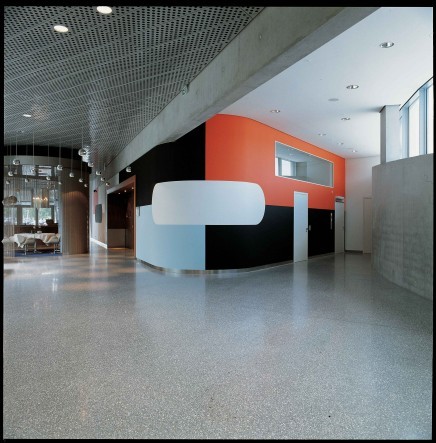 Jan van der Ploeg first began painting his geometric designs on the walls of buildings in his native Amsterdam. Since then, he has painted his motifs in hundreds of permutations at galleries and institutions all over the world. Using different combinations of common shapes, bold colors, and shifts in scale, his wall paintings invite viewers to experience spaces in new and dynamic ways. Van der Ploeg’s large-scale painting for the Hammer, installed in the Museum’s Lobby, considers the specific architecture of the space, adding new depth and dimension to a familiar place.

In making an initial appraisal of Jan van der Ploeg’s work, one is left with the question of whether it deals with form or content, a question that has played a significant role in the history of Dutch art and literature. In Van der Ploeg’s work this dilemma takes on a topical character because when one is confronted with the artist’s forms, color fields, and compositions, the question as to the deeper meaning behind the visible form is especially penetrating. What is this art actually all about?

This is a typically Dutch formulation. Nearly a hundred years ago the argument about form and content raged with a particular fury within Dutch literary circles. The polarity was summed up with the near-populist antithetical terminology of vorm of vent, which translates literally as “form or fellow.” (The Dutch word vent is not precisely equivalent to the English fellow in that it has connotations of toughness and authenticity, referring to what is popularly known as a “real man.” In the Dutch debate it functioned as a metaphor for strong content, as opposed to an emphasis on aesthetic form.) In our contemporary culture of multiple identities, metrosexuals, and postfeminism, such language is highly anachronistic. Nonetheless, within the context of a traditionally macho profession such as painting, this question should be addressed. Macho? Yes indeed, because, despite the fact that there are important female painters, the trappings of painting—the paintbrush, the painterly gesture, and the fetishism of the material—have undeniably male connotations.

Painting has been back on the menu of fashionable media within the visual arts for several years. The Netherlands—the land of Van Gogh and Mondrian—has always remained an important country for painting even when the rest of the world had long declared the medium dead. Van der Ploeg has thus been able to develop within a comparatively tolerant and even stimulating climate. That is certainly evident in his work, which is characterized by tenacity, solidity, and consistently high quality. Work by a no-nonsense sort of guy, if I might be permitted to employ such traditional, almost nineteenth-century language.

Since the late 1960s, when Robert Ryman appeared to take the modernist project to its logical reductionist conclusion, painting has been defined as the application of pigment to a support with the aid of a device. This sounds simple, but it is merely a technical definition of a medium that involves much more than a series of mechanical procedures. This is made clear time and again in the work of Jan van der Ploeg. One can recognize several recurring features in his oeuvre that might give the impression that its most important element is consistency. But upon closer observation and analysis, we realize that behind these apparently abstract forms hides a wealth of choices and contextual decisions and an almost corporeal humanity.

In the first instance this is made clear by the way in which the artist employs recurring formal elements, which he calls “grips” and “waves.” The latter seem to be a further development of the former, which may be seen as a two-dimensional reduction of handlelike forms. An important characteristic of both is their ability to be conjoined in bold serial patterns, producing a fascinating play between figure and ground: a two-dimensional game emphasizing a democratic non-hierarchy between the various waves and grips, destroying any distinction between foreground and background. A regular pattern emerges from the organic intertwining of the equivalent formal elements, which is the painter’s clear signature—a subtle formal game with seriality, with a quality that calls to mind (Ryman’s) minimal art.

In his plans for the Hammer Museum, Van der Ploeg has created not a pattern in the sense discussed above, but rather a heightened interplay of several colorful grips, which take up the position of large organic entities. They lack the pronounced horizontality and verticality sanctioned by the tradition of Mondrian and are instead floating, falling, toppling, and diving—painterly volumes that move in search of balance within the painterly space, a painterly space that is in turn situated within the context of an architectural space. Van der Ploeg stage-manages within this context and allows his trusty formal language to seek out a new position within the actual physical space, for the spaces in which he paints are real and actual—in any case, much more real and actual than the artificial spaces of the canvas, paper, or panel.

Walls, facades, stairwells, and lobbies are the supports for Van der Ploeg’s paintings. Recently his works appear to have taken on an almost cartoonesque or caricature-like quality, as if the painter has shed his relative modesty. He has painted all the walls of a classical interior in the Charlottenborg Exhibition Hall in Copenhagen with an oversize brick pattern, producing a work that in a certain sense has a figurative effect and makes a direct comment on the surrounding space. Van der Ploeg’s wall paintings have the ability to give structure and to create a completely novel spatial awareness. By stacking five colored stripes one above the other in a long, narrow corridor in the Museum Boijmans Van Beuningen in Rotterdam, he managed to evoke a thoroughly new sense of space among the museum’s visitors. This wall painting also had something of the cartoonesque; indeed the stacking of the specific colors quickly earned the work the nickname “Licorice Allsorts.” And the proposal for the Hammer Museum also has, as mentioned earlier, a figurative, almost humane quality.

Jan van der Ploeg’s projects always contain an unmistakable element of spatial transformation. They are bound to their context and are directed at the visitor’s point of view. Increasingly they seem to have taken on a more figurative formal language. It seems to me that this provides sufficient reason for saying that the old Dutch schism has been sublimated in Van der Ploeg’s work—not “form or fellow,” but increasingly “form and fellow.”

Rein Wolfs has been the chief curator for exhibitions at Museum Boijmans Van Beuningen, Rotterdam, since 2001. He has curated major exhibitions focusing on the work of John Bock, Maurizio Cattelan, Fischli/Weiss, Urs Fischer, Erik van Lieshout, and Rirkrit Tiravanija.

Jan van der Ploeg was born in 1959 in Amsterdam, where he currently lives. He studied art in Amsterdam at the Gerrit Rietveld Academie and the Rijksakademie van Beeldende Kunsten, and in London at Croydon College of Art. He has recently had solo exhibitions at House of Art, Budweis, Czech Republic (2007); Museum Boijmans Van Beuningen, Rotterdam (2006); and Gemeentemuseum Den Haag, The Hague (2005). Recent group exhibitions include Contour at Museum Het Prinsenhof, Delft, The Netherlands (2007); I Am Yours Now at Sikkema Jenkins & Co., New York (2006); and Later On We Shall Simplify Things at Centre Cultural Andratx, Majorca, Spain (2005). This is Van der Ploeg’s first museum exhibition in the United States.