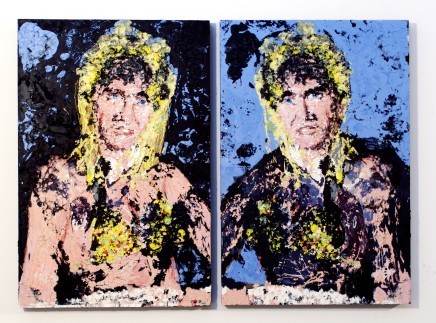 Several years ago, Kaari Upson found some personal items in an abandoned house in her neighborhood that were left behind by the former occupant, a man named Larry (last name withheld to protect his privacy). She had heard rumors that Larry was fond of women, and was interested in Hugh Hefner, Frisbee and athletics, astrology, and studies in self-improvement.

Upson began the task of delving into Larry’s past to search for insight into this man’s character, but gradually she turned to fantasy and conjecture, dreaming up new personas for Larry, and new relationships linking him with her. Eventually all objectivity disintegrated and Larry became Upson’s obsession.

Here, Upson introduces segments from Larry’s story in a variety of media. She maps out her investigation in drawings featuring leads, lists, and questions related to her quest, as well as images of both Larry and herself in various states of intimacy, as well as replicas of real astrological charts, handwriting analyses, and birth certificates. In the diptych “Kiss” paintings, which are made by pressing separate portraits of him and her together while the paint is still wet, she cements their bond and merges their identities. Upson makes high resolution blow-ups of miniature paintings of compositions formed by snapshots and personal documents. The highly detailed prints become forensic evidence revealing traces of the artist’s hair and fingerprints, and the original pictures and documents are barely discernible. In a silent video shot by a neighbor, we see Larry’s house slowly, and mysteriously, burn to the ground (firemen were present and oversaw a controlled burn). In two other videos, Upson pushes their relationship to a further extreme. She made a life-size dummy of Larry and in one video she surgically removes his head, skins it, and puts his head over her own. In her latest video, she spouts out phrases from the ‘80s self improvement program, est, while helping the life-size dummy of Larry to “find his inner asshole” (a signature est directive).

Blurring the lines of reality and fantasy, public and private, self and the other, Upson provocatively demonstrates the difficulty of ever truly knowing the essence of someone, no matter how much of their personal information you might possess.
hammer.ucla.edu