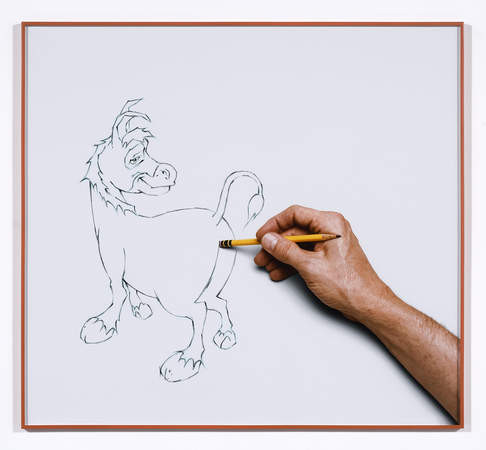 Johnson’s work is quintessentially of and about Los Angeles. The exhibition features over 60 color photographs, spanning Johnson’s career beginning in 1982 to the present. He combines glossy imagery with witty and at times cutting references to popular culture, animation, gay subcultures, and moderne architectural design. Much of his work explores the themes of Hollywood and celebrity, especially the edges of that world, where aspirations and fantasies bump up against reality.
Johnson emerged from CalArts in the early 1980s and he remains among the most respected artists of his generation. His work is characterized by a postmodern conceptualism that uses appropriation, repetition, and deceptive simplicity. Johnson rarely makes unique objects, instead creating photographic editions that are defined by their humor and rely heavily on stylistic elements such as animation, graphic design, commercial illustration, and advertising.
Like his artwork, Larry Johnson is a product of Southern California. He was born in 1959 in Lakewood, California, an emblematic middle-class suburban development built around a gigantic shopping mall. Joan Didion wrote that Lakewood in the 1950s is where two powerful national interests converged: “that of keeping the economic engine running and that of creating an enlarged middle or consumer class.”
The effects of this formative environment coupled with the influences of other Los Angeles-based artists such as Ed Ruscha, Douglas Huebler, and John Baldessari, who all experimented with combing found images and text fragments, are important foundations of his work. These earlier artists developed practices that use conceptual strategies to critique conventional approaches to art making. Johnson took these self-reflexive strategies and turned them outward – exploring and critiquing his surrounding communities.
Similar to work by many of his influences, Johnson uses text as both an object in and subject of his photographs. For example, in two different series – Untitled (Movie Stars on Clouds) and Untitled (Movie Stars on Red) – Johnson creates pictures of celebrity names floating on a nondescript background. Through this very subtle but powerful maneuver the textual names become as loaded and representational as the celebrity’s physical image. The name is the object and the person named is the subject. It is this kind of decontextualization and recontextualization that makes Johnson’s work at once elegantly efficient and at the same time almost willfully obscure. The viewer is simultaneously titillated and alienated by the works’ stylistic simplicity and conceptual complexity.
The exhibition features a range of Johnson’s work spanning his entire career. Johnson’s photographs are created through a highly complex and exacting process of scanning multiple drawings, paintings, and collages into a single cohesive image that at times resemble animation cels and Pop art. Despite the apparent simplicity and sharp focus of his images, Johnson’s work delves deeply into the fabric of American culture revealing an often sardonic, frequently melancholy or nostalgic underpinning. He takes as his subjects marginalized Hollywood figures including less recognized film stars and street hustlers; other recurrent themes include the Kennedy family, along with Arnold Schwarzenegger and singer Nancy Sinatra. The texts that are such a crucial part of Johnson’s work are sometimes written by him and at other times appropriated from disparate sources such as People magazine, pulp fiction, celebrity autobiographies, black box flight recorders, and rock lyrics.
A thorough survey of Johnson’s work is long overdue. Johnson’s work has featured in numerous gallery exhibitions and has been included in many institutional thematic exhibitions including at the Museum of Contemporary Art, Los Angeles, the Museum of Modern Art, New York, the Whitney Museum of America Art, and the Hammer’s Mirror Image exhibition in 2002. The Hammer Museum has three of Johnson’s works (all from 2007) in its collections: Untitled (Meters), Untitled (Copier), and Untitled (Projector).

Curated by Russell Ferguson, Chair of the Department of Art, UCLA.
www.hammer.ucla.edu