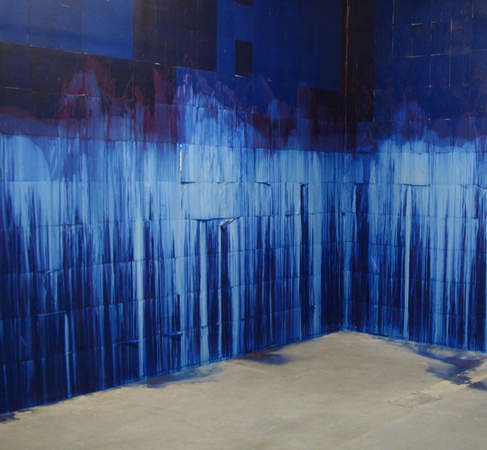 For her Hammer Project, Latifa Echakhch will reprise her 2007 work À chaque stencil une revolution (For each stencil a revolution) for the Hammer’s lobby wall. After attaching hundreds of sheets of carbon paper to the wall, Echakhch will treat the surface with a solvent that causes the ink to run down the pages and pool on the floor. Her use of carbon paper points to an outmoded duplication technology that was central to the ability of political groups of earlier generations—such as the civil rights and anti–Vietnam War protests of the 1960s—to disseminate information and opinions. The title of the work is a quotation from the Palestinian leader Yasser Arafat who was referring to the proliferation of revolutionary groups and protest movements. While the work pays homage to the uprisings of that period, it rings with melancholy: stripped of its ink, the paper is robbed of its potential to carry any message. Referring as well to both abstract expressionism and the signature blue of Yves Klein, the work asks us to reconsider the relationship of abstract art to politics. Hammer Projects: Latifa Echakhch is organized by Hammer senior curator Anne Ellegood.