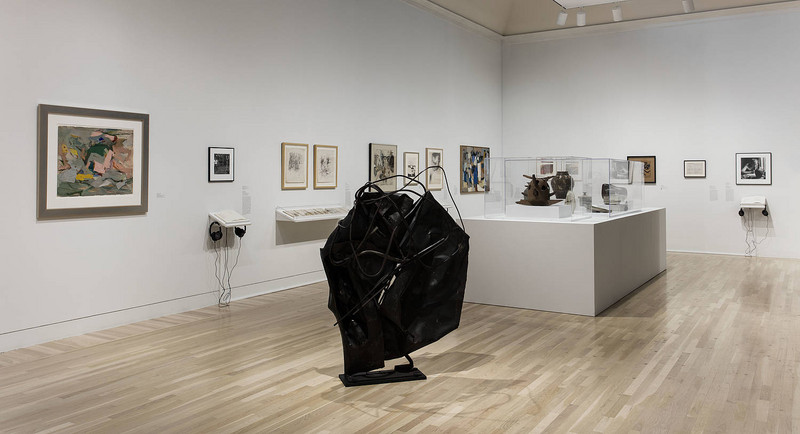 The first comprehensive museum exhibition in the United States about the experimental liberal arts college where influential artists such as Robert Rauschenberg, John Cage, Josef and Anni Albers, and Merce Cunningham studied and taught.

“We do not always create ‘works of art,’ but rather experiments; it is not our intention to fill museums: we are gathering experience.” –Josef Albers

Leap Before You Look: Black Mountain College 1933-1957 is the first comprehensive museum exhibition in the United States to examine the history of Black Mountain College (BMC). Founded in 1933 in North Carolina’s Blue Ridge Mountains near Asheville, this renowned experimental college placed the arts at the center of a liberal arts education in an effort to better educate citizens for participation in a democratic society. Profoundly interdisciplinary with an emphasis on inquiry, discussion, and experimentation, it gave equal attention to the visual arts—painting, sculpture, drawing—and so-called applied arts or crafts like weaving, pottery, and jewelry-making, as well as architecture, poetry, music, and dance.

Influenced by the teaching of philosopher John Dewey and the ideals of the progressive education movement, there were no required courses and free inquiry and learning by doing were encouraged. Students often developed cross-disciplinary independent studies and all members of the college were responsible for its day-to-day operation, including maintenance, farm work, and kitchen duty. Numerous influential artists, poets, musicians, and performers either taught or were students there. This utopian experiment came to an end in 1957, but not before it created the conditions for some of the twentieth century’s most fertile ideas, having an enormous impact on American postwar cultural life. Black Mountain College became a dynamic crossroads for refugees from Europe— several of whom were Jewish and fleeing persecution, including Josef and Anni Albers who were brought to BMC in 1936 from the Bauhaus in Germany—and an emerging generation of American artists. Their education was unlike anything else in the United States, rooted in a belief in art and its capacity to expand one’s internal horizons, and in art as a way of living and being in the world.

Leap Before You Look: Black Mountain College 1933–1957 focuses on how, despite its brief existence, BMC became a seminal meeting place for many of the artists, musicians, poets, and thinkers who would become the principal practitioners of the postwar period. Teaching at the college combined the craft principles of Germany’s revolutionary Bauhaus school with interdisciplinary inquiry, discussion, and experimentation, forming the template for American art schools. The methods of teaching developed at the BMC—such as an emphasis on interpretation and dialogue in the form of the student critique (or “crit”)— are still present in many of our most advanced art schools; the language of interdisciplinarity began at BMC and the mixture of disciplines and mediums gave way to what is largely regarded as the first “happening”; and the aspirations of intentional communities, utopian ways of thinking, bridging the gap between art and life, and the creation of a counter-culture that are characteristic of American culture in the 1960s all flourished at the college in the preceding decades. While physically rooted in the rural South, BMC formed an unlikely cosmopolitan meeting place for American, European, Asian, and Latin American art, ideas, and individuals. The exhibition argues that BMC was as an important historical precedent for thinking about relationships between art, democracy, and globalism. It examines the college’s critical role shaping many major concepts, movements, and forms in postwar art and education, including assemblage, modern dance and music, and the American studio craft movement—influences that can still be seen and felt today.

The exhibition contains a rich and varied mixture of materials in the areas of painting, sculpture, weaving, and pottery. There are also documentary photographs and other archival ephemera, books printed on campus by BMC poets and sound works of readings, and a stage and piano for performances to take place regularly during the run of the exhibition. There were four main instructors at the college—Josef Albers, Buckminster Fuller, John Cage, and Charles Olson—and the exhibition will show works by each, alongside works by their students and other faculty, including Anni, Ruth Asawa, Merce Cunningham, Robert Creeley, Jess, Ray Johnson, Elaine and Willem de Kooning, Gwendolyn and Jacob Lawrence, Robert Rauschenberg, M.C. Richards, Cy Twombly, Peter Voulkos, and Susan Weil. For example, there are photographs of BMC students working to assemble the first geodesic dome with Fuller, as well as sculptures made in the spirit of Fuller’s experiments. There are scores by Cage; photographs of Cage and Cunningham’s performances; Ben Shahn’s cover art for Charles Olson’s chap books; Japanese ceramic vessels of Shoji Hamada; and early sculptures by John Chamberlain, to name only a few of the objects included.