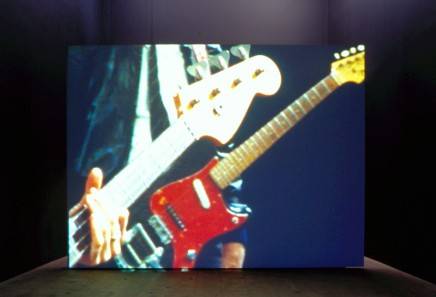 
The Hammer Museum is the inaugural venue for Crystal Palace, a new film by Austrian artist Mathias Poledna, shot on location in Papua New Guinea. Crystal Palace is an installation featuring a large-scale projection of a 35mm film comprised of a small number of contemplative, static shots of the montane rainforest landscape of the Southern Highlands Province of Papua New Guinea. Using tightly framed medium-close to medium-wide shots, the film’s few and carefully selected scenes capture the luscious colors, patterns, textures, structures, and the overall abstract color fields created by these natural elements. Only minor changes in light and movement among the foliage provide visual cues to the passage of time. The film is accompanied by a dense and highly edited soundtrack mixing on-location as well as archival field recordings of, among other ambient sounds, distinct bird calls from this region.

In this work, Poledna specifically references the 1951 album Sounds of a Tropical Rainforest, produced by Folkways Records for the American Museum of Natural History. Though the album was intended as an authentic document to accompany an exhibition about Amazon tribespeople at the museum, the recordings were made almost entirely at the Bronx Zoo. Informed by film history, Poledna also cites the interconnections between early film and popular and avant-garde cinema in addition to the 1960s ethnographic films of Hermann Schlenker as influences on Crystal Palace, which, similar to Schlenker’s films, lacks an authoritative, narrative voice as it investigates a foreign place filtered through the camera’s lens.