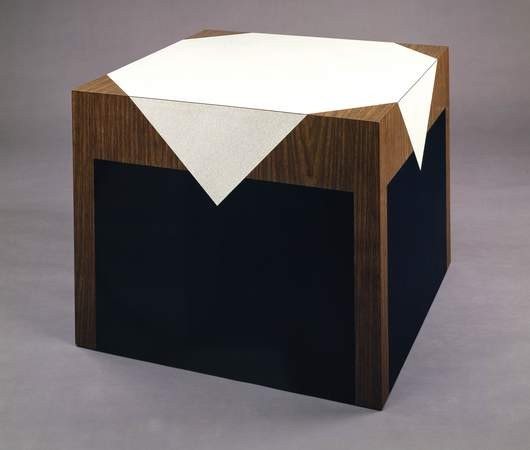 In the summer of 2013, the Hammer Museum will present Richard Artschwager!, a full-scale, major retrospective exhibition of the work of Richard Artschwager (b. 1923). Organized by the Whitney Museum of American Art in association with the Yale University Art Gallery, the exhibition opened at the Whitney in October 2012. Approximately 150 works survey Artschwager’s remarkable exploration of the mediums of sculpture, painting, and drawing, bringing to light the extraordinary breadth of subject matter and form in his practice. The selection highlights the extensive study of material, shape, and style in Artschwager’s work, while revealing how the artist’s unrelenting investigation of art objects and images has been informed by the equalizing lens of photographic reproduction in the 20th century. This is the first retrospective exhibition of Artschwager’s work since one organized at the Whitney in 1988 and will introduce Artschwager to a new generation that has never before experienced his work. Alongside his contemporaries, Jasper Johns, Robert Rauschenberg and Cy Twombly, Artschwager is widely known as one of the 20th Century “giants” who played a significant role in establishing American art’s formidable place in the art historical canon. The exhibition is curated by Jennifer Gross, Seymour H. Knox, Jr. Curator, Modern and Contemporary Art at Yale University Art Gallery in association with the Whitney’s Alice Pratt Brown Director, Adam D. Weinberg. The Hammer’s presentation is organized by Anne Ellegood, senior curator.

This exhibition was organized by the Whitney Museum of American Art, New York, in association with the Yale University Art Gallery, New Haven.

The Hammer Museum's presentation of Richard Artschwager! is made possible by a major grant from the LLWW Foundation. Generous support is also provided by Fundación Jumex, A.C.; The Audrey & Sydney Irmas Charitable Foundation; The Broad Art Foundation; Linda and Bob Gersh; and Chara Schreyer.

The exhibition was made possible by the National Committee of the Whitney Museum of American Art, The Broad Art Foundation, The Andrew J. and Christine C. Hall Foundation, Allison and Warren Kanders, Norman and Melissa Selby, and Alice and Tom Tisch.
hammer.ucla.edu