Take It or Leave It: Institution, Image, Ideology 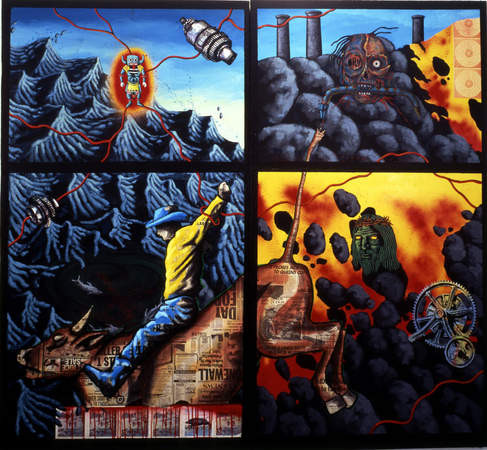 The Hammer Museum presents Take It or Leave It: Institution, Image, Ideology, the first large-scale exhibition to explore intersections between strategies of appropriation and institutional critique in the work of American artists. Locating shared impulses among those artists who borrow and recast existing images, styles, and forms from popular mass-media and fine-art sources, and others who confront the structures and practices of institutions in order to scrutinize their role within society, the exhibition sheds new light on art-making as it evolved during the 1980s and 1990s. Take It or Leave It includes works by 35 artists, including Gretchen Bender, Jimmie Durham, Andrea Fraser, Felix Gonzalez-Torres, Mike Kelley, Barbara Kruger, Adrian Piper, Fred Wilson, and David Wojnarowicz, and highlights their deep engagement with political and social issues. The exhibition is organized by the Hammer Museum and co-curated by Anne Ellegood, Senior Curator at the Hammer Museum, and Johanna Burton, Keith Haring Director and Curator of Education and Public Engagement at the New Museum.

Take It or Leave It: Institution, Image, Ideology is made possible by a major grant from The Andy Warhol Foundation for the Visual Arts. Generous support is also provided by The Audrey and Sydney Irmas Charitable Foundation, Karyn Kohl, and the National Endowment for the Arts.
hammer.ucla.edu