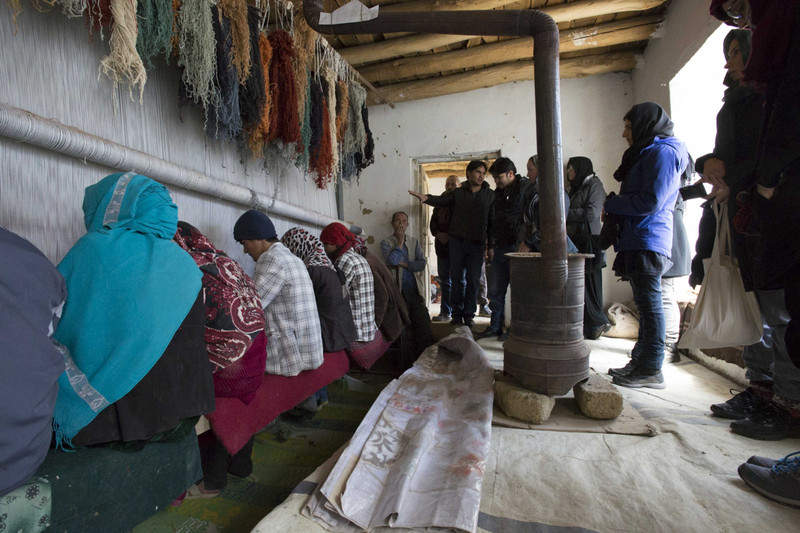 The Afghan Carpet Project features six carpets designed by L.A.-based contemporary artists—Lisa Anne Auerbach, Liz Craft, Meg Cranston, Francesca Gabbiani, Jennifer Guidi, and Toba Khedoori—which were handmade by weavers in Afghanistan. The exhibition is the culmination of a project that began with a trip to Afghanistan to visit weavers in Kabul and Bamiyan in March 2014. (Read journal excerpts from the trip.) The trip provided the artists with insight into the craft and the production process, as well as the living and working conditions for the weavers. Following the trip, each artist came up with an original design for her carpet—some reflecting upon the experience, and others derived out of the artists’ respective practices. The project was initiated by the not-for-profit organization AfghanMade, along with carpet producer Christopher Farr, Inc. with the goal of collaborating with women weavers in Afghanistan. All profits from carpet sales (after fabrication costs are recovered) will benefit Arzu Studio Hope, an organization that established weaving studios in Afghanistan, which provide fair wages, education, and healthcare to Afghan women. The show will also include photo documentation of the trip, shot by Auerbach.

This exhibition is organized by curator Ali Subotnick with Emily Gonzalez-Jarrett, curatorial associate.

In the contemporary art world, the first name that comes to mind when one thinks of Afghan carpets is usually that of the Italian artist Alighiero Boetti, who began traveling to Afghanistan in the early 1970s and worked closely with weavers there and in Pakistan to make carpets of maps, grids, and other custom designs. While at the time Boetti was interested in using weavers, in part, as a way of removing his own hand from his art production, this project instead focuses attention on local artisans and the role of individual craftspeople in the production of this fine art. More recently contemporary artists have engaged with craft as a way of engaging with the histories and economies of labor and the handcrafted and their various associations with gender and the domestic. In March 2014, at the invitation of the Hammer Museum, six Los Angeles–based artists—Lisa Anne Auerbach, Liz Craft, Meg Cranston, Francesca Gabbiani, Jennifer Guidi, and Toba Khedoori—traveled to Afghanistan to visit weaving facilities and learn about the process and history of handweaving carpets, a traditionally female craft in the region. The trip grew out of a collaboration between the Hammer Museum and the Los Angeles–based carpet designer, Christopher Farr. Farr’s company had been invited to produce carpets in Afghanistan by Lisa Sanchez, founder of the nonprofit organization AfghanMade, which aims to revitalize traditional industries such as carpet weaving, cashmere production, and jewelry.
hammer.ucla.edu