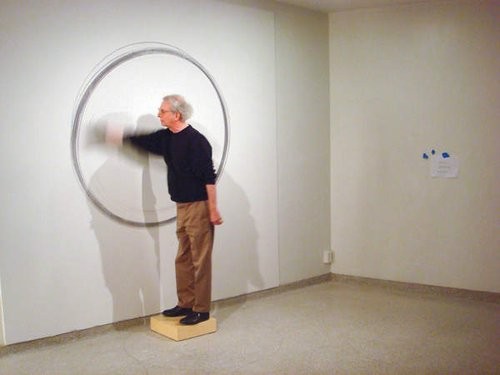 For over forty years, Tom Marioni has been experimenting at the boundaries of art. His first art action—One Second Sculpture (1969) in which he released a coiled metal tape measure into the air and allowed it to fall to the ground—encapsulated Marioni’s desire to eradicate the distinctions between sculpture, music, drawing, and performance by embodying all of the genres at once. A key figure in the invention of Conceptual Art in the 1960s, Marioni’s identity as artist, writer, and curator also defies categorization. In 1970, he founded the Museum of Conceptual Art in San Francisco as a venue to support his own work and that of his friends and colleagues, and he has published his writings in various periodicals and books. Through the decades, Marioni has continued to, in his words, “observe real life and report on it poetically”, amassing a body of work comprised of drawings, prints, actions, and writings that articulate his desire to unite people and ideas. For his first one-person exhibition in Los Angeles, Tom Marioni will present his on-going artwork Drinking Beer with Friends is the Highest Form of Art. Along with the bar-like installation and the detritus of each of the four gatherings he will host as part of the piece, the exhibition will feature a selection of Marioni’s drawings. Organized by Hammer senior curator Anne Ellegood, Hammer Projects: Tom Marioni is his first one-person exhibition in Los Angeles.