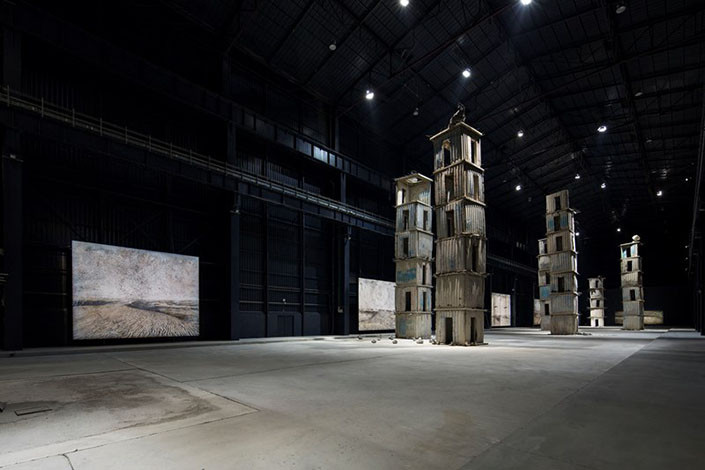 On 25 September 2015 Pirelli HangarBicocca unveiled the new installation by Anselm Kiefer: the new display, curated by Vicente Todolí, is an expansion of The Seven Heavenly Palaces, the permanent work conceived for the opening of Pirelli HangarBicocca in 2004 and based on a project by Lia Rumma. Together with the seven “towers” – now open for the public to walk through – five large-format paintings, made between 2009 and 2013 but never shown until now, will form a single installation entitled The Seven Heavenly Palaces 2004-2015.
Five large paintings are on show in the space of the “Navate” that contain The Seven Heavenly Palaces, adding to the permanent installation and giving new meaning to Anselm Kiefer’s masterpiece. The paintings are Jaipur (2009); two works of the series entitled Cette obscure clarté qui tombe des étoiles (2011); Alchemie (2012) and Die deutsche Heilslinie (2012-2013). Using the language of painting, these works make reference to some of the themes already present in The Seven Heavenly Palaces, including the great architectural constructions of the past viewed as an attempt by man to ascend to the divine, with the constellations represented by means of astronomical numbering. They also add a number of considerations that are key to the artist’s poetic vision, including the relationship between man and nature, and references to the history of ideas and of Western philosophy.

The new display for Anselm Kiefer’s works is a special project that launches the new three-year programme of Pirelli HangarBicocca running till 2018, curated by the Artistic Director Vicente Todolí.