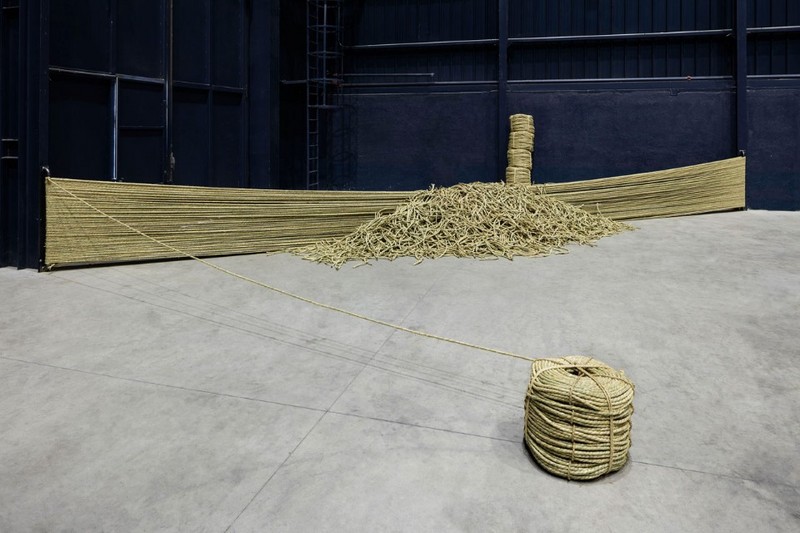 “Situations” is the first European retrospective dedicated to Kishio Suga (b. 1944 in Morioka, Japan). For the first time in the career of this pivotal figure in contemporary Japanese art, over twenty of his installations, dating from 1969 to the present, are shown together in the Navate space.

Kishio Suga was among the prime movers of Mono-ha, an artistic group born in the late 1960s. He began showing his work at a time of great cultural ferment in Japan and international experimentation, marked by movements like Postminimalism and Land Art in the United States and Arte Povera in Italy. In 1978, Suga was chosen to represent his Country at the Venice Biennale, introducing the West to an artistic language in which the investigation of materials and space is rooted in a deep affinity to nature and the environment.

“Situations” brings together a series of pieces the artist has adapted to the industrial architecture of Pirelli HangarBicocca. Forging an intense relationship with the vast spaces of the Navate, it unfolds along a single path that balances lightness and gravity, linearity and tension, solidity and intangibility. In keeping with his practice, Suga’s works are presented here as temporary projects which exist for the duration of the show, site-specific in both a spatial and temporal sense.

The exhibition highlights the common threads and experimental nature of the artist’s oeuvre, presenting a landscape of organic and industrial elements—iron, zinc, wood, stone, and paraffin—materials which he often finds on site. At Pirelli HangarBicocca, the pieces therefore take on new qualities and characteristics that differ from previous versions.

«I constructed installation pieces, a format that has become quite common today, inside galleries. I bring a variety of things into the gallery, arranging them and giving them structure so that they occupy the entire space. The installations are never permanent and can be quickly disassembled or demolished. One might say that I create temporary worlds» (Kishio Suga, The Conditions Surrounding an Act, 2009)

After graduating from the painting department of Tama Art University in Tokyo in 1968 and working as a studio assistant for American artist Sam Francis, Kishio Suga began making and showing his work at a time of great artistic ferment in Japan. The years between 1969 and 1972 witnessed the emergence and growth of Mono-ha, a movement that also included Kōji Enokura, Noriyuki Haraguchi, Shingo Honda, Susumu Koshimizu, Lee Ufan, Katsushiko Narita, Nobuo Sekine, Noburu Takayama, and Katsuro Yoshida. Although the term Mono-ha literally translates as “School of Things,” the artists were neither an organized group, nor were their individual practices exclusively focused on things or objects. Their diverse work was united by the choice to use simple materials (both natural and industrially manufactured) as a means to explore the relationships between the individual, matter and surrounding space. Their works were often the result of direct, interactive actions, such as suspending, dropping, breaking and stacking. Mono-ha is therefore centered on both the material properties and the performative dimension of the artwork. These thematic and formal aspects can be seen as having a resonance with the Italian movement of Arte Povera.

A connection to Italy also emerges from the many exhibitions on Mono-ha held in this country. Over several decades, works from the movement have been featured at various Italian institutions, in shows such as “Mono-ha: La scuola delle cose” at Museo Laboratorio di Arte Contemporanea, Rome, in 1988; “Avanguardie Giapponesi degli anni 70” at Galleria Comunale d’Arte Moderna, Bologna, in 1992; “ASIANA: Contemporary Art from the Far East” at Palazzo Vendramin Calergi, Venice, in 1995; “Prima Materia” at Punta della Dogana, Venice, in 2013, and most recently, “Mono-ha” at Fondazione Mudima, Milan, in 2015.

The exhibition opens with a hanging installation, Critical Sections, reconstructed for the first time since 1984. Black and white strips of fabric, dangling from the ceiling from over twenty meters above, have been interwoven by the artist with branches found on site, and connected to zinc plates laid out on the floor below. Through a process of tension and release, the artist creates what he calls a “situation,” highlighting the existential links between the materials in the work and the space around it. Laid out along the side aisles are installations such as Continuous Existence—HB, 1977/2016, and Infinite Situation III (Door), 1970/2016, where Suga explores the relationship between the floor and walls, interior and exterior, using materials such as branches, rope and a wood beam. The artist’s practice assigns a central role to the concept of “interdependence” among different materials as a way of creating a single entity. This allows the visitor to observe the surroundings in their entirety, while perceiving the intangible spaces generated by the presence of the artworks, or “invisible” ones like the corners of rooms. Other works investigate the physical characteristics of their materials, like Parallel Strata, 1969/2016, made entirely from layered blocks of paraffin, or Soft Concrete, 1970/2016, composed of cement, gravel and sheet metal.

The Cubo space is rendered inaccessible to the public by Left-Behind Situation, 1972/2016. This work, reconstructed in its largest version to date, is made up of a single length of industrial wire stretched across two levels of the space, connecting different points on the four walls and horizontally creating diagonal intersections on which blocks of stone and wood rest in precarious balance.
Outside, visitors can contemplate Unfolding Field, 1972/2016, an installation of bamboo poles placed on structures made from cement and lightweight cables: a work that highlights the importance of open-air, natural elements in Suga’s practice.

Selected Exhibitions
Kishio Suga (b. 1994 in Morioka, Japan) lives and works in Ito, Japan. He has been exhibiting his work since the late 1960s. In recent years his work has been shown at many institutions around the world, including the Museum of Contemporary Art, Tokyo (2015); the Jewish Museum, New York (2014); Punta della Dogana, Venice and The Warehouse, Dallas (2013); and the Museum of Modern Art, New York (2012). In 2000 he took part in the 3rd Gwangju Biennale and in 1978 he represented Japan at the 38th Venice Biennale.
pirellihangarbicocca.org/