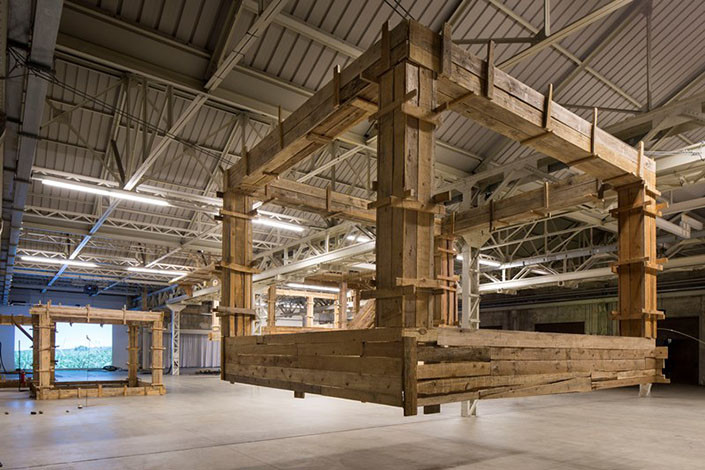 “Space Shuttle in the Garden” brings together and connects, for the first time, a selection of works by Petrit Halilaj (1986, Kosovo) from recent years as well as new ones conceived specifically for the occasion. Setting out from the life and history of the artist and from the changes that have occurred in his native country, the exhibition explores universal themes such as memory, the search for identity, and the concept of home as both a shared and private space, arriving at reflections on community and on the creation and preservation of a common cultural heritage.
The exhibition is above all a journey into the artist’s universe and mythology. Moving between imagination and reality, Halilaj’s works describe a world which is both familiar and surreal: sculptures, drawings, performances, videos and installations explore the tides of history and the evolution of the world around us, blending together yesterday and today, the real and utopian, relative and absolute. Each piece, while drawing on events, objects and stories equally from the past and present, looks to the future, always harboring the artist’s hopes and desires, hinting at romantic, humorous and also often peculiar visions and dreams that have yet to come true. Positioned outside Pirelli HangarBicocca, the work They are Lucky to be Bourgeois Hens II (2009) serves as an antechamber to the show: a wooden rocket ship constructed by the artist’s relatives, neighbors and friends, with its interior painted an elegant Klein blue, is inhabited by chickens, preparing to discover a new still to be invented world.

As an iconic work of the 2010 Berlin Biennial, The places I’m looking for, my dear, are utopian places, they are boring and I don’t know how to make them real (2010-2015), the artist’s reconstructed life-size family house, appears here in a completely new form. A stark, spectral image, the work evokes a sense of loss that nevertheless shuns all sentimentality and nostalgia. Like a vast family portrait, it describes an idealized place in constant transformation. Suspended within the exhibition space, the house now fragmented, reflects the changes its inhabitants have lived through. All the rooms that we consider personal have broken away from the ones with collective, shared functions, to move freely, finding their own place and autonomously interacting with the surroundings.
Si Okarina e Runikut (2014) is a series of sculptures inspired by a Neolithic wind instrument found in the village of Runik, Kosovo. The works are vessel flutes that invite visitor participation and while originally conceived to be played individually, the artist reconstructed them to possibly enable collective engagement. Elegantly poised on brass stands or freely strewn on the floor, they decidedly live in the present and in the public moment when the instruments are played. Si Okarina e Runikut thus becomes a metaphor for the entire show: a journey through private, personal experiences that, shared, become a tool for communication, discovering ourselves and questioning the world around us.

An exhibition catalogue will be published in collaboration with Mousse Publishing in spring 2016
pirellihangarbicocca.org/