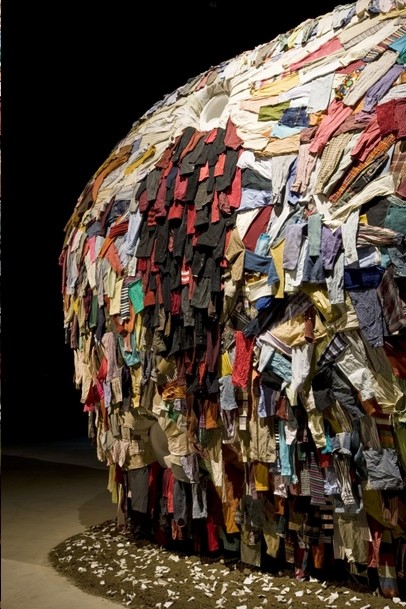 © Nari Ward
Soul Soil
© Foto di Agostino Osio
TERRE VULNERABILI 4/4
The chain's weakest link is also the strongest because it can break the chain
6 May - 17 July, 2011

4/4 - THE CHAIN'S WEAKEST LINK IS ALSO THE STRONGEST BECAUSE IT CAN BREAK THE CHAIN*
(*Stanislaw J. Lec)
Project by Chiara Bertola curated with Andrea Lissoni
Ackroyd & Harvey / Mario Airò / Stefano Arienti / Massimo Bartolini / Stefano Boccalini / Ludovica Carbotta / Alice Cattaneo / Elisabetta Di Maggio / Rä di Martino / Bruna Esposito / Yona Friedman / Carlos Garaicoa / Alberto Garutti / Gelitin / Nicolò Lombardi / Mona Hatoum / Invernomuto / Kimsooja / Christiane Löhr / Marcellvs L. / Margherita Morgantin / Ermanno Olmi / Roman Ondák / Hans Op De Beeck / Adele Prosdocimi / Remo Salvadori / Alberto Tadiello / Pascale Marthine Tayou / Nico Vascellari / Nari Ward / Franz West
The chain and the ring of the sentence by Stanislaw J. Lec inevitably bring with themselves the images of the connection among the elements. It’s so that the last suggestion of Terre Vulnerabili is also the metaphor of an entire and long exhibition readable as a cyclic process where the elements succeed one as consequence of the other. At the same time, it also evokes True solutions come from the bottom up, the first title of the four phases of Terre Vulnerabili. The fragile ring that breaks the structure yet narrates the dynamics of a workgroup and the process it requests in order to arrive to the final work; it reveals its strength in it, because it’s the element which creates the destructive instant, the fracture, opening a new phase and a diverse possibility of development and sense. That’s why it is also an image that can represent an effective metaphor of the artist, the figure almost by definition of the “misaligned”, in comparison to the laws, to the pre-established and predictable patterns. Fragility as creativity, thus, as place where one can reveal the essence of art.
Walter Benjamin had foreseen this link. In his messianic vision history is not a linear and continuous progression of facts linked to one another in a necessary way; its sense emerges instead in the folds and in the recesses of the development, just there where something shatters the order and the consequentiality: in that revolutionary instant freedom breaks in, the possibility to redeem the ruins of the past which extend in front of men’s eyes. Thus the Angelus novus - the German thinker so imagines the artist, the philosopher, the poet... - is overcome towards the future: looking with pain to the past he leans towards a different future, to a maybe better world. In the fragile and critic instant of the reflection, of the conscious gaze turned to the world, he shatters the habit, the resigned scansion of moments, discovering the reign of possibility and utopia. In his vulnerability and fragility, the artist performs a powerful gesture.
Terre Vulnerabili changes for a last time, radically evolves and assumes its final form, having renounced to a definitive one in favor of the variation and of the infinite possibility. It entirely takes place in the “high” space of the Hangar, abandoning the Shed and welcoming four additional new artworks, among which those by Alberto Tadiello, by Pascale Marthine Tayou and by Nari Ward are specifically realized and that by Roman Ondák is unpublished in Italy. Others transform themselves once again (Bruna Esposito, Margherita Morgantin), others grow or melt (respectively Ludovica Carbotta, Adele Prosdocimi, and Invernomuto), others add up again to other pre-existing ones (Alberto Garutti, Christiane Löhr, Elisabetta Di Maggio), many of them finally move and recombine in new and unexpected configurations...
pirellihangarbicocca.org/