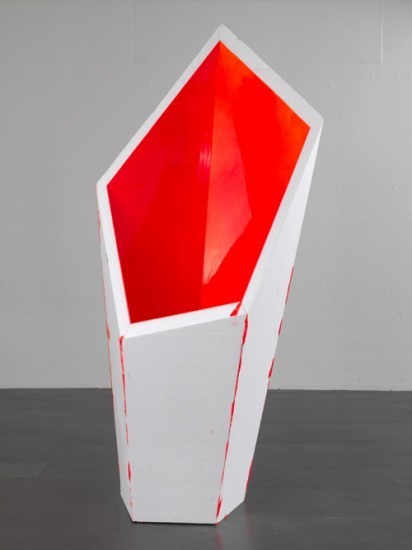 Art Scope, a mécénat activity of Daimler Foundation Japan, provides contemporary artists from Japan and Germany the chance to experience life in the other country. As a partner in the program since 2003, the Hara Museum will once again host an exhibition showcasing the results of the exchange by four participants: two from Germany in 2009 and two from Japan in 2010.
The exhibition also marks the very long relationship that has endured between the two nations under the banner “150 years of Friendship German-Japan.”
In video works, Meiro Koizumi (b.1976) uses dramatic elements to explore communication between persons and the relationship between people and society in ways that are at times humorous, at times cool and detached. Drawings of Hiroe Saeki (b.1978) consist of meticulously detailed organic shapes and large, boldly incorporated white spaces. These unique pictorial spaces are at once tranquil, yet seething with tension. Using a wide variety of materials from fabrics to metals, Eva Berendes (b.1974) creates three-dimensional works and installations that are subtly transparent so as to foster a dialog with the space that surrounds them. The materials used by Jan Scharrelmann (b.1975) are industrial in nature, consisting mainly of styrofoam or epoxy resin. The works he makes are abstract in form, with hard, colorful layers of paint that lends power to his expression. All works on display are the most recent by the artists, each created after their participation in the exchange program.
At first glance, the exchange experience of each artist may not be directly discernible in the artworks on display. But the months of living in a different culture must inevitably be etched within their respective minds where they exist in the unseen background of each work as invisible memories. On the viewer side, the images made by the artist stimulate the senses and imagination, stirring up “things” that precipitate within their own minds as “invisible memories.”
The works act as catalysts on the intermingling invisible memories--memories that may be clear, ambiguous, personal or collective—giving rise to images that can be shared. The power that causes this may be thought of as the power of art. The Hara Museum, first built during the 1930s as a personal residence, contains many unseen memories within its spaces. By containing the works, such spaces are sure to add their own special appeal, while enhancing the impact of the works themselves.

Meiro Koizumi Born in Gunma Prefecture in 1976 and currently residing in Yokohama. A participant in Aichi Triennale 2010 (Nayabashi site) and a frequent exhibitor at venues within Europe and other overseas locations.

Hiroe Saeki Born in Osaka in 1978 and currently residing in Tokyo. The recipient of the 2006 VOCA Encouragement Prize. Participated in Artist File 2008 - The NACT Annual Show of Contemporary Art (The National Art Center, Tokyo).

Eva Berendes Born in Bonn in 1974 and currently residing in Berlin. A frequent exhibitor in the US and Europe, mainly in Germany.

Jan Scharrelmann Born in Cologne in 1975 and currently residing in Cologne. Has had many solo and group exhibitions, mainly in Germany.
www.haramuseum.or.jp