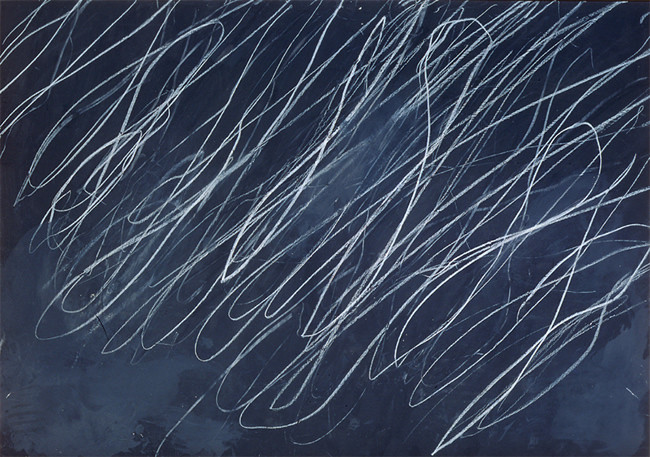 The Hara Museum of Contemporary Art is proud to present the first major solo exhibition in Japan by Cy Twombly, one of the titans of twentieth-century art. Featuring some 70 drawings, paintings and monotypes1 done on paper from 1953 to 2002, this retrospective spans 50 years of Twombly's extraordinary career. It was first held in 2003 at the State Hermitage Museum in St. Petersburg2 , organized by Julie Sylvester, the Hermitage's first non-Russian curator with Cy Twombly himself taking part in the selection of the artwork. Although the artist sadly passed away in 2011, the present show was made possible by the cooperation of the Cy Twombly Foundation which participated in all aspects of its planning. Although Twombly is represented in a number of museum collections in Japan3 and has been featured in several group shows4 , the relatively few opportunities to see Twombly's art in Japan make this present show a long anticipated event by Japanese audiences.

A number of works by Cy Twombly will be on display for a limited period at the Kankai Pavilion at Hara Museum ARC, the Hara Museum's annex in Shibukawa, Gunma prefecture (see "Related Exhibition"). This special shoin-style wing (designed by Arata Isozaki) is normally dedicated to the display of traditional East Asian art from the Hara Rokuro Collection. However, during this period, a number of works by Twombly will be juxtaposed with selected pieces from the collection to promote a dialog that transcends time, culture and space.


Who Is Cy Twombly?
Cy Twombly (1928-2011) was one of the most widely admired artists of the 20th century. Both a prolific painter and sculptor, he developed a style of painting that may be best described as painted poetry. Born in the United States, he began dividing his time between the US and Italy from his late 20s. Over the next decades, he quietly cultivated his own unique niche within the art world, aloof from the major art trends. His fame, however, grew on both sides of the Atlantic and spread to the rest of the world, garnering him many honors and awards that included Japan's Praemium Imperiale in 1996, the Golden Lion Award at the Venice Biennale in 2001 and the Legion of Honor Chevalier Medal in 2010.

Pollock later adopted his famous "action painting" style, while Abstract Expressionism gave way to other styles such as Color Field painting, exemplified by the later work of Rothko. Twombly, however, stuck to his own style, a gestural one in which he applied paint to surface with his bare hands to create images of great energy, spontaneity and sensuality. After transferring his base to Rome in 1957, he continued to distance himself even as American art branched into Pop Art and Minimalism during the '60s. In a sense, Twombly may be seen as having incorporated the qualities of Pollock's action painting into the development of his own style while standing "outside" of the American mainstream.

After moving to Rome, Twombly found inspiration in the myths, history and literature (from ancient to modern times) of the Mediterranean. His themes also included the landscape around him, which he interpreted in his own unique manner. Twombly's paintings and drawings were constructions made up of improvised lines, spattered paint, letters, numbers and symbols (including snippets of verse), combined in seemingly random fashion with a unique use of space. Although seemingly lacking in order, these images could be likened to painted poetry

Critical Assessment
Twombly worked in relative obscurity until the end of the 1970s when his career reached a turning point. The Whitney Museum of American Art held a retrospective of his art in 1979 and Yvon Lambert 5 published a catalogue raisonné of his works on paper in the same year, which contained an essay on Twombly by Roland Barthes, the renowned French philosopher-critic. His fame became even more international during and after the 1980s. He held a retrospective exhibition at the Museum of Modern Art, New York (MoMA) in 1994, followed by another in 1995 at the Menil Collection Museum in Houston, Texas in the newly completed Cy Twombly Gallery, an annex designed by Renzo Piano as a venue dedicated to Twombly's art. During his last years, Twombly's renown was further validated by the many awards he received such as the Praemium Imperiale in Japan (1996), the Golden Lion Award at the Venice Biennale (2001) and the Legion of Honor Chevalier Medal (2010) in France.

1. A kind of print that is made by pressing paper to a painted or inked plate made of metal or glass. Unlike other printmaking techniques that produce multiple uniform copies, monotype printing produces only one or two copies.