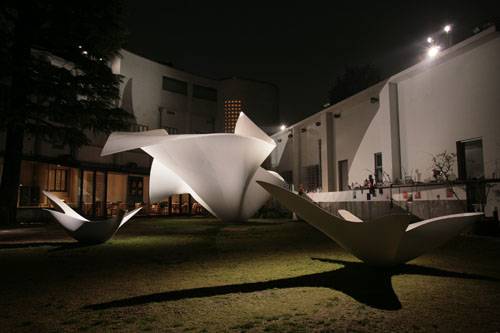 "25," the anniversary exhibition of the Deutsche Bank Collection, was a magnificent success; more visitors to the Deutsche Guggenheim in Berlin were counted than ever before. Now, the show has traveled to the Hara Museum in Tokyo with a completely new concept. As in Berlin, Zaha Hadid's visionary exhibition design once again enters into an inimitable symbiosis with the art. Achim Drucks on "Tokyo Blossoms" - the presentation of the Deutsche Bank Collection in Japan's most renowned museum for contemporary art.

At the opening of Tokyo Blossoms, the wind gently blows over the huge flowers in the Hara Museum's nocturnal garden. Zaha Hadid was inspired to create these futurist floral sculptures by Hanami, the Japanese cherry blossom festival during which the Japanese hold picnics and parties to celebrate the highpoint of the spring beneath the flowering cherry trees. Falling across their white surfaces are the shadows of the many guests who have come to the most renowned Japanese museum for contemporary art to take part in the opening of the second station of the anniversary exhibition of the Deutsche Bank Collection. It is an atmospheric image: the rounded forms of Hadid's flowers gleam in the daylight that floods the bright exhibition hall while the other sculptures in the museum's garden become lost in the sketchy obscurity of the nighttime darkness.

The largest of the Tokyo Blossoms is over thirteen feet tall and provided an impressive backdrop for the opening speeches. Ariane Grigoteit, director of Deutsche Bank Art, underscored how exciting the preparations for the project were: "For us, it was a fascinating experience to discover the bank's art from a completely new perspective. Thanks to the museum's curatorial guidance, a completely unique show has arisen that reflects upon the Deutsche Bank Collection as an international corporate collection focused on young and current positions." Toshio Hara, the museum's founder, patron, and director, drew parallels between the museum and the Deutsche Bank Collection. Both institutions were founded in 1979, and for both, contemporary art is an element of an open society that furthers an understanding of our globalized present.

After the speeches, guests followed Hadid's "carpet of blossoms" into the interior of the museum building, where the contours of the London-based star architect's sculptures are echoed as shadows on the floor. The intimate rooms of Toshio Hara's former family villa, built in 1938 in the Bauhaus style, provide an ideal space for the works he and his team selected. For Tokyo Blossoms, the curators concentrated entirely on international contemporary art - with a focus on the works of German artists.

The show devotes an entire room to Tobias Rehberger's ambiguous works. On his seemingly innocent watercolors of mountain ranges, red circles mark the places where mountain climbers fell to their death. The series S.M.V., made in 1993, depicts the battlefields of the First World War as idyllic landscapes. The scene in Gerhard Richter's Kahnfahrt (Canoe Ride) from 1965 has a historical feel; the blurry motif, based on a photograph, seems to be surfacing in the memory. In the Hara Museum, together with photographs by Fischli and Weiss, Wolfgang Tillmans, and Thomas Ruff, paper works by artists ranging from Sigmar Polke and Georg Baselitz to Rosemarie Trockel and Neo Rauch create a panorama of contemporary German art.

But many international art stars are present in Tokyo, as well: in her silhouettes that are both poetic and cutting, Kara Walker investigates racist and sexist stereotypes in the US. Richard Prince's autograph postcards examine the American celebrity cult: whether it's Cameron Diaz or Mike Tyson, the stars stereotypically wish him "All the best." Luc Tuymans' 1998 drawing Gemecties in blurred greys was placed effectively next to the former fireplace of the modernist villa; William Kentridge created his expressive charcoal drawings for the installation Black Box, which was seen for the first time in October 2005 at the Deutsche Guggenheim. Turner Prizewinner Chris Ofili presents the people in his watercolor series as African icons in a kaleidoscope of colorful garments and artistic hairstyles. The curators' choice - more than 130 works by 38 artists - shows a preference for works that merge seductive beauty with a proximity to the abyss.

Although there are numerous Japanese artists in the collection, the exhibition limits itself to Yutaka Sone, Emiko Kasahara, Atsuko Tanaka, and Miwa Yanagi, for whose video installation Kagome Kagome Zaha Hadid designed a tunnel-like room. On the upper floor, the visitor once again encounters the pure white blossom sculptures that accentuate the museum space. And the show's next station in Singapore on the occasion of the biennale there will certainly provide another opportunity for the star architect to transform the exhibition space into a spectacular Gesamtkunstwerk.
www.haramuseum.or.jp