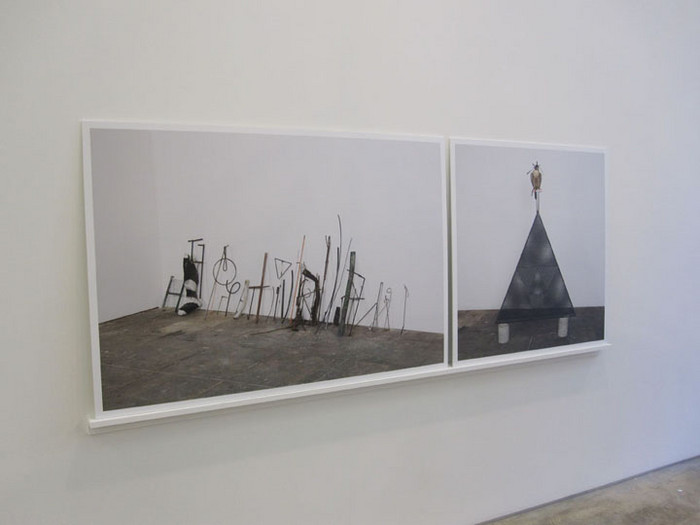 Harris Lieberman is pleased to present Evan Holloway’s second solo exhibition at the gallery. A keen satirist and social critic, Holloway coined the term “analog counterrevolution” to describe his particular approach, which eschews the slick effects of the digital and renews the conceptual and material possibilities of sculpture and photography.
Dark Ride (all works 2010) serves as a metaphoric linchpin for the various works on view. Rotating slowly in the gallery, a cylindrical, black velour column conceals a massive, messily painted formalist sculpture: a creature curiosity that viewers must incrementally take in, bit by grotesque bit, as they track along a vertical slit in the velour. Holloway’s piece draws inspiration from “dark rides” and “entertainment machines” like The Enchanted Tiki Room of Disneyland, where amusement follows an automated, predetermined course. By bringing this model into the gallery, the artist builds duration back into the viewing experience, obliging visitors to spend the time to piece a sculpture together.
Emperor Ideal humorously stages a dialogue between real and Platonic forms, here taking shape as a freestanding, brass chain sculpture and a hanging brass isosceles triangle – both of which have the same material weight.
Set against the proportionate clarity of the triangle, the sculpture seems to fever with aggression, as its very chains bind two figure-like elements into a master/slave relationship.
For Diptychs, Holloway photographed impromptu assemblages of his studio scraps, including bits of stock iron and a candy-colored, paper sculpture of corpses. These elements, discarded for one reason or another from the artist’s body of work, achieve the belated validation of gallery exhibition by mimicking contemporary conventions of photography and display. Yet even as Holloway turns his cast-offs into tastefully arranged props, and leans his mounted photographs against simple wood shelves, the suspicion remains that the artist’s tongue is firmly (and characteristically) planted in his
cheek.
Evan Holloway received his BFA from University of California, Santa Cruz and an MFA from University of California, Los Angeles. In 2008 Holloway had a solo exhibition at the Pomona College Museum of Art, Claremont, CA. His work has been included in numerous international group exhibitions, including the 2002 Whitney Biennial; the 2008 California Biennial; The Uncertainty of Objects and Ideas: Recent Sculpture, the Hirshhorn Museum and Sculpture Garden, Washington DC; and Moby Dick and Wizard of Oz, both at CCA Wattis Institute, CA. Holloway will be featured in All of This and Nothing at the Hammer Museum in 2011. He lives and works in Los Angeles.
www.harrislieberman.com