No Bees, No Blueberries 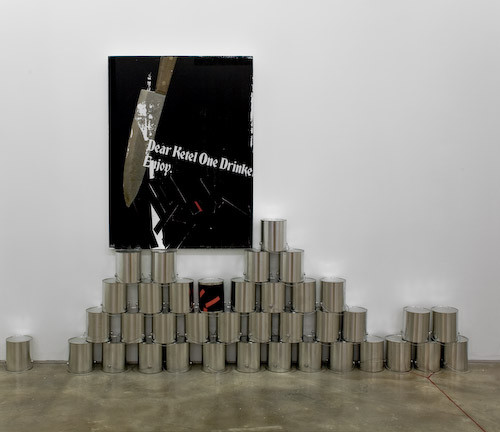 Harris Lieberman is pleased to present No Bees, No Blueberries, an exhibition of work from over forty multigenerational artists.
No Bees, No Blueberries takes its title from a playful observation, made by artist Andrea Blum, linking the low yield of blueberries last summer to a decline in the bee population. Over the centuries, various communities have attempted to explain the cyclical disappearance and rehabilitation of bees by the preoccupying issues of the times, from the recent concern with global climate change and the predominance of synthetic insecticides, in the 1960s, to a 19th century theory of the “low moral fiber” of the insects themselves.
Bees occupy many a human metaphor, as well as everyday expressions like “the bee’s knees” and “busy bee,” reminding us of the productive and socialized energies inside and outside the hive. The insect attracts champions and critics alike: Einstein promoted the bee’s foundational role in the life-chain, given that pollination effects one-third of human and animal food supply; Nietzsche, in On the Genealogy of Morals, indicted the “worker bee” mindlessly toiling away within a vast enterprise; and recent theories address the insect as an agent of transmission, dissemination, replication and reproduction, cross-pollinating plants and flowers in a generative, promiscuous, and sexually hybrid manner.
In the midst of an economic moment that increasingly draws focus to the top-down frailty of the art world, No Bees, No Blueberries investigates the artist, her resilience, her capacity for self-organization and the flexibility of her communities. Many of the exhibiting artists pair formal pursuits with meditations on social structures. Among them, Peter Simensky, Nikolas Gambaroff and SALOON employ sub-curated artworks and performances that call conventional delineations of production into question. Nicolás Guagnini, Heman Chong and Kim Seob Boninsegni assemble visual lexicons from the material and rhetorical fragments of exhibition posters and propaganda. John Baldessari’s shallow-relief sculptures and Ann Craven’s fluttering birds offer representations of the organic and programmatic forces at play throughout the exhibition.
A series of performances and events will run concurrently with No Bees, No Blueberries, with contributions from B’Ling, Cleopatra’s, The Bruce High Quality Foundation and others.
www.harrislieberman.com