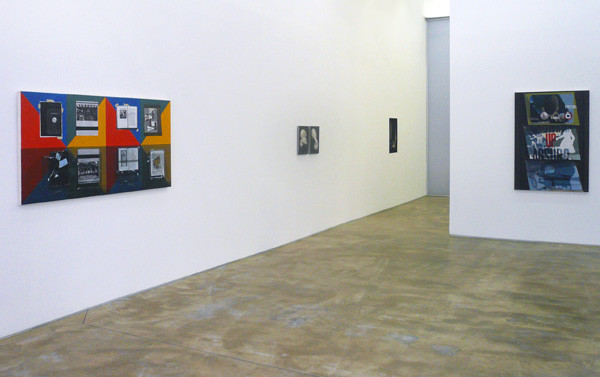 H arris Lieberman is pleased to present Painted Objects, an exhibition of five artists whose works update the historical theme of still life painting. William Daniels reinterprets iconic paintings from art history. He builds sculptural tableaux in cardboard and torn paper that are the basis for his meticulously executed oil paintings. Daniels was born in 1976 and lives and works in London. Since graduating from the Royal College of Art in 2003, Daniels has had solo shows at Marc Foxx, Los Angeles and Vilma Gold, London and has participated in group shows at The Drawing Room, London and Transmission Gallery, Glasgow. German painter Matthias Dornfeld creates brightly colored canvases depicting variations on the still life theme, from the classic vase to masks of the human face. His gestural technique draws attention to the process of painting itself. Dornfeld was born in 1960 in Esslingen, Germany and lives and works in Berlin. He has had recent solo exhibitions at Rowley Kennerk Gallery, Chicago, and Galerie Ben Kaufmann, Munich. Melissa Gordon paints compositions of layered and fractured images that are both visually complex and strangely familiar. For this exhibition, she has created two new works that are based upon case studies of Gestalt therapy, an esoteric and experimental form of psychotherapy founded in the 1940s. Born in Boston in 1981, Gordon studied at the Rhode Island School of Art and Design and Cooper Union, New York. From 2003 to 2005 she was an artist in residence at De Ateliers in Amsterdam. Her work was recently included in Dealing With Reality at Museum voor Moderne Kunst, Arnheim, Netherlands, Compilation III at Kunsthalle Dusseldorf, and in a solo exhibition at Ancient & Modern in London. Gordon lives and works in Berlin. Evan Gruzis’ ink on paper drawings combine the aesthetics of 1980s pop advertising with a dark, film noir sensibility. His hyper-stylized subject matter is at once romantic and banal. Gruzis will complete his MFA at Hunter College in 2008, and his work has been included in group exhibitions at The Whitney Museum and David Zwirner Gallery, New York. Lesley Vance creates spare small-scale still life paintings in the tradition of 17th Century Spanish painters such as Juan Sanchez Cotán and Francisco de Zubarán, imbuing these classic subjects with sensuality and a dark surrealism. Vance lives and works in Los Angeles. She received her MFA from the California Institute of the Arts in 2003, and has had a solo exhibition at David Kordansky Gallery, Los Angeles and a two person exhibition at Stuart Shave/Modern Art,
www.harrislieberman.com