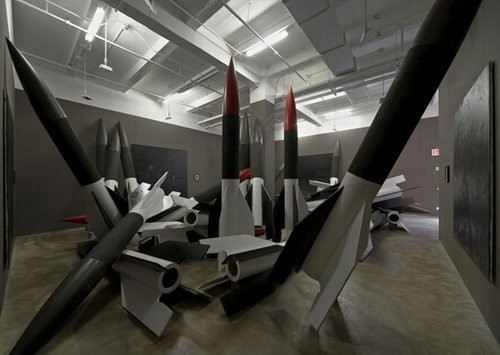 Harris Lieberman is pleased to announce the opening of Dwarf Nose, Thomas Zipp's second solo exhibition at the gallery. In his new work Zipp continues to investigate the themes of power and sexual symbolism, creating a dark, psychological universe with references to physical and social sciences. The exhibition will feature a new series of paintings as well as a major sculptural installation comprised in part of decommissioned Patriot Missile warheads.
The title of the exhibition comes from a bizarre 19th century German fairy tale by W. Hauff. In the story a young boy is kidnapped by an old woman. He insults her and in return, she transforms him into an ugly dwarf with no neck and a long nose. She makes him work in her household, run by guinea pigs and squirrels. When he finally escapes, he goes unrecognized by his parents and is forced to work as a cook for a duke until a young girl who has been turned into a goose helps him undo the spell. He reciprocates by helping her regain her true form.
Thomas Zipp currently lives and works in Berlin. He is a graduate of the Staedelschule, Frankfurt and the Slade School of Art, London. His work has been exhibited widely at institutions including Tate Modern London; Haus der Kunst Munich; PS1 Center for Contemporary Art, New York and Museum of Contemporary Art, Chicago. In addition he has had solo exhibitions at the Kunstverein Oldenburg His exhibition Planet Caravan: Is There Life After Death? A Futuristic World Fair, originated last summer at the Kunsthalle Mannheim, Germany and has subsequently traveled to South London Gallery and Kunstmuseum Mülheim.
www.harrislieberman.com