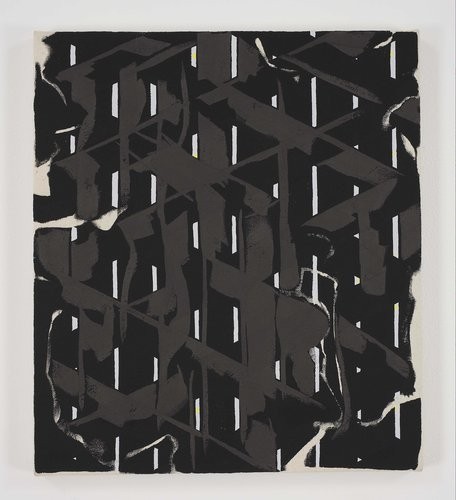 Harris Lieberman is pleased to present an exhibition of new paintings by Zak Prekop. This is the artist’s first solo show in New York.
Working in oil on canvas and paper, Prekop tests and plays upon the limits and possibilities of painting. His paintings invite subtle and contradictory readings, as he foregrounds the physicality of the painted canvas, at times, and its decorative and illusory possibilities, at others. Deceptively thin surfaces, upon inspection, reveal the many layers and elements of Prekop’s intricately structured canvases. Other pieces approach states of near-invisibility. Minimal, gridded compositions fade into translucence, shifting attention beyond the edges to their institutional and material supports – including the stretcher bars that shadow the painted fabric.
In flat, almost monochromatic surfaces, Prekop effects soft fluctuations of light and color that tease out hidden layers and confuse perception.
Through these materially reflexive and often mystifying gestures, Prekop produces an intimate and highly ambiguous viewing experience, in which his paintings’ contingencies and indeterminacies are echoed in the unfixed and dynamic space of the viewer.
Zak Prekop (b. 1979) is a graduate of the Art Institute of Chicago.
He currently lives and works in Brooklyn, New York. He was recently included in Greater New York, MoMA PS1, Queens.
www.harrislieberman.com