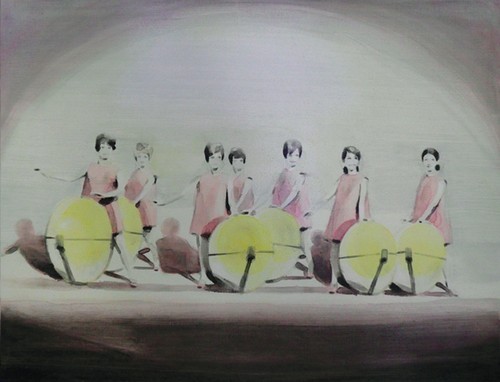 'Transmission' brings together three emerging London-based artists – a painter, a sculptor and a multimedia artist – and explores the affinities they share with regards to notions of transference and abstraction. While the work of is shaped by very different thematic and formal
concerns, there are underlying correspondences in their approach to considerations such as the transmission of meaning, the dislocation of context and the mutation of form. Objects and forms are often manipulated or abstracted in their works, their original function obscured. This exhibition seeks to reveal the points of intersection in Dix, Hoda and Paterson's practices, showcasing the work of three exciting young artists at the start of promising careers.

Adam Dix mines the graphic culture and sociology of the 1950s in his paintings, creating portentous, science-fiction-inspired scenes in which regimented or ritualistic figures are posited in a strange and indeterminate relationship with the devices of modern telecommunications: computers, satellite dishes, and communication towers. In these imagined compositions, Dix deploys the pastel palette of 1950s graphic material, building up layers of ink and oil washes in a way that mimics the outdated effect of early mass-produced prints. Dix is interested in how humanity is instrumentalised by its reliance on communication and connectivity, and how its attitude towards modern telecommunications frequently assumes the reverence and awe of ritualistic or cult-like behaviour. His is a visual language that at once suggests a nostalgic longing for a technological utopia, and the failed promises of such a vision.

Alex Hoda's rubber and latex sculptures possess a psychic and sexual energy that borders on the fetishistic while maintaining a strong relationship to classical form. Fashioned from a variety of found objects – kitsch ceramic animals, Halloween masks, sex toys and other paraphernalia – which are removed from their original context and transmuted into new, anthropomorphically suggestive forms, Hoda's beasts exhibit basic, animalistic drives and are seemingly engaged in acts of rutting, suckling, nurturing and mating. Resistant to literal or plainly descriptive forms, these sculptures sustain an uneasy tension between figuration and abstraction, between the internal and external, and between the classical and the abject or grotesque. They are as closely in dialogue with Rodin or Henry Moore as they are with Matthew Barney or Paul McCarthy. Evocatively titled using conjunctions such as Gobstopper, Screwdriver or Jawbreaker, Hoda's ambiguous forms foreground the very process of sculpture – its acts of joining and combining, morphing and mutating.

Katie Paterson's conceptual projects make use of sophisticated technologies and specialist expertise to stage intimate, poetic and philosophical engagements between man and his natural environment. Combining a Romantic sensibility with a research-based approach and coolly minimalist presentation, her work collapses the distance between the viewer and the most distant edges of time and the cosmos. In the past, Paterson has broadcast the sounds of a melting glacier live to a visitor on a mobile phone in an art gallery, mapped all the dead stars, compiled a slide archive of the history of darkness across the ages, custom-made a light bulb to simulate the experience of moonlight, and buried a nano-sized grain of sand deep within the Sahara desert. Eliciting feelings of humility, wonder and melancholy akin to the experience of the Romantic sublime, Paterson's work is at once understated in gesture and yet monumental in scope. The development and production of her work involves close collaboration with specialists in different technologies, whether astronomers, electrical engineers or amateur radio enthusiasts known as 'moon-bouncers'.
www.haunchofvenison.com