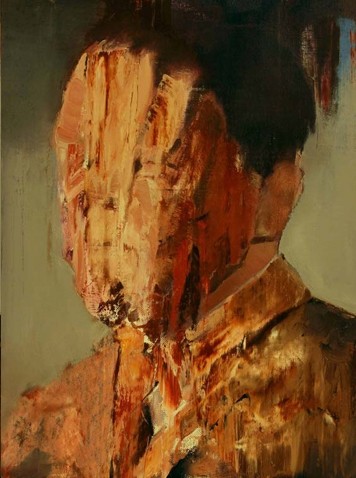 Haunch of Venison is delighted to announce the first solo show in
Britain by acclaimed young Romanian painter, Adrian Ghenie. The
exhibition demonstrates Ghenie's ongoing exploration of the medium of paint, and his enduring fascination with European history, addressed through ideas relating to memory, trauma and extremism.

The sources for Ghenie's images are derived from a combination of his own memories and from historical books, archives and films. While Ghenie often engages with specific and emblematic images and moments in twentieth century history - the death of Stalin, the Hollywood comedy stars Stan Laurel and Oliver Hardy, the art collection amassed by Herman Goering during the second World War, or the infamous Dada fair of 1920 Berlin - his paintings are never prescriptive but rather open to a multitude of possible interpretations.

Figurative imagery is buried within drips and pours of paint, scraped and weathered surfaces, which perhaps represent contrasting states of clarity, fluidity and erosion. Ghenie seems to suggest that history and memory are never fixed, but rather in flux.

Much of Ghenie's new work explores the phenomenon of Dada, as part of an ongoing investigation of a 'history of extremism' and
displacement in the twentieth century. That many of the leading
members of the Dada movement were exiled in America during the second World War, connects this new body of work to earlier themes in Ghenie's oeuvre such as 'The Flight into Egypt'. For example, Ghenie's portrait of Marcel Duchamp renders the iconic artist as a blind old man, an abject, vagrant figure.
www.haunchofvenison.com