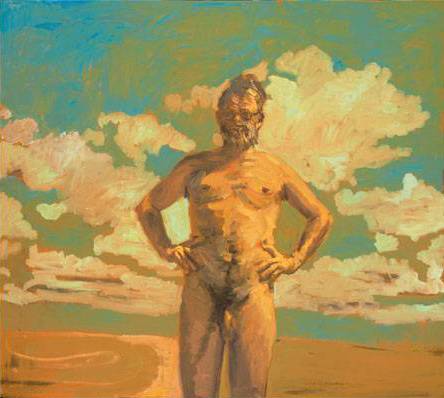 Anton Henning (German, born Berlin in 1964) is a painter whose diverse subjects and styles, from abstract to figurative, from pin-up girls to interiors are plundered knowingly from art history and popular culture. However, unlike Picabia to whom he has been compared, Henning’s diverse paintings are united by a delight in sensual pleasure, a passion for the tactile quality of paint, and a critical and subversive wit. Recurring motifs and subjects, particularly the Hennling – a propeller-like design that metamorphosis from tattoo to sculpture to abstract design, reveal further unity within his oeuvre.

Sandpipers, Lizards & History is Henning’s first major show in London, and presents over a dozen new paintings including abstract interiors, pin-up girls, a naked self-portrait, and a beach scene. In Sandpipers, Lizards and History the top-floor of the gallery has been transformed into a lounge. The installation includes colourful murals, comfortable furniture, paintings and lamps. It creates the effect of an unreal world, and a sense of being inside one of Henning’s paintings. Indeed, his installations are loosely based on his earlier paintings of lounge interiors.

There is a tension in Henning’s practice between his abstract and figurative works, and this tension is often played out within a single canvas. For example, in Pin-up No.96 (Ariadne), 2005 (pictured above) a sunbathing naked woman is overpainted on an abstract patterned background that can be read as a huge beach towel. However, Henning has given the work a black horizon, introducing an element of pure abstraction, and giving the total composition a sense of the surreal. This playful combination of disparate elements and styles helps to make seemingly familiar imagery strange and arresting. By overpainting he creates further tension between spatial depth and the picture plane.

Henning lives and works in Manker, Germany. He has exhibited widely throughout Europe and had recent solo shows at the Kunstmuseum Luzern (2003) and the De Pont Foundation, Tilburg, Holland (2002). In March 2005 he opened a two-year installation at the MMK Frankfurt and in October 2005 he will have two solo shows at the Krefeld and Herford Museums in Germany. Henning’s work is included in many important museum and private collections across Europe.