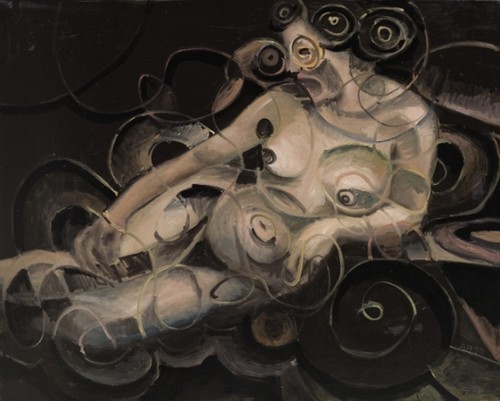 Masterdote/Antisinger, a major exhibition by Anton Henning, the German artist born in 1964 in Berlin. Featuring more than eighty works, including painting and sculpture, furniture and drawing, video, and a site specific stained glass window, the exhibition considers Henning’s oeuvre as a series of interrelated riddles, precariously positioned between irony and grandeur.

The title of the show, Masterdote/Antisinger, is a compelling collage of Wagner’s opera about art and creativity, ‘Die Meistersinger von Nürnberg’ (‘The Mastersingers of Nuremberg’), and ‘antidote’, the medical term for an agent that counteracts a poison. It follows from the similarly themed Antidote and Antonym, two recent museum exhibitions which were part of a five museum series in Germany and Holland over the past twelve months.

The work itself, and the enigmatic way it is presented, reveals both the absurdist and traditional vein of Henning’s art, from the seemingly sober to the dazzling and whimsical. Henning is anti-unconventional in his examination and use of traditional (conventional) art genres from portrait, landscape, nude and still life. He is relentlessly anti-didactic, orchestrating a dance between Modernistic and anti-Modernistic principles and railing against prevailing art world expectations, conformities, etiquettes and a fashionable, one-note, one-liner kind of irony. Henning’s work is instead defined by its variety, its internal contradictions and its multi-layered register.

Masterdote/Antisinger is a complex exhibition that will enable multiple responses. Henning’s pursuit of an antidote to the norm is dependent on his ability to act in opposition to himself, as if assaulting his own nature is the only way to become a Mastersinger, or, in artistic terms, an Alte Meister. To this end, Henning has invited his artist colleague Eric Hattan to intervene in the exhibition, introducing a further irony to the idea of an exhibition as a monument to a single vision.

Henning’s art is humourous and self aware, and while nodding in reference to many other artists, he shows a joyous confidence in expression as he freely mixes and samples, paints, sculpts and performs, to create works that go against the grain of much contemporary art today.
www.haunchofvenison.com