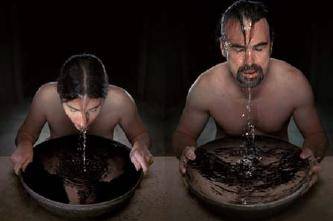 Bill Viola (born America, 1951) is internationally recognised as one of the world's leading contemporary artists. For over 30 years he has been at the forefront of developing the medium of video art, helping to establish it as an essential genre of contemporary visual art. Viola has exhibited at museums worldwide, including the National Gallery, London in 2003. Viola's work focuses on universal human experiences, of birth, death and the unfolding of consciousness. While it often draws on the conventions of Western art especially the Medieval and Renaissance periods, the work is also informed by Viola's involvement with the spiritual traditions of Zen Buddhism as well as his studies of Christian mysticism and Islamic Sufism. Viola has expanded the content and historical reference points of video art, while he has simultaneously explored the technological potentials of the medium, breaking boundaries and pushing video to its limits. LOVE/DEATH: The Tristan Project is a museum-scale exhibition showing across two venues and will present over ten new works. Like Viola's previous works, they range from room-sized video projections of image and sound to small, silent flat panel screens, and seek to deeply engage the viewer in a visceral and emotional experience that goes to the roots of the human condition, and its spiritual sources. Most of the works in LOVE/DEATH: The Tristan Project arise from the hours of material that Viola produced for a new production of Richard Wagner's nineteenth century opera, Tristan und Isolde. A collaboration between Viola, theatre director Peter Sellars, Esa-Pekka Salonen, conductor of the Los Angeles Philharmonic, and Kira Perov, executive director of the Bill Viola Studio, the opera was first presented in concert form in Los Angeles in December 2004, and received its fully staged premier in Paris at the National Opera Bastille in April 2005. Rather than presenting a narrative interpretation of the story, Viola's images, projected throughout the entire four-hour performance, evoke a symbolic visual world that exists in parallel to the worldly events unfolding on the stage. Viola has said: Tristan und Isolde is the story of a love so intense and profound that it cannot be contained in the material bodies of the lovers. In order to fully realise their love, Tristan and Isolde must ultimately transcend life itself. The works in the exhibition reflect different stages in the lover's path towards death and liberation.
In Purification (2005), a man and a woman independently undertake the ritual preparations for symbolic sacrifice required for their transformation and rebirth. This process methodically unfolds in seven contiguous image sequences across a time span of fifty minutes. The individual sections are: The Approach; The Arrival; The Disrobing; Ablutions; Basin of Tears; The Dowsing; and Dissolution. The images are projected side by side as a large diptych on two adjacent screens mounted to the wall.
Press Release
Lover's Path (2005), traces the journey of the lovers from their emergence out of the subtle darkness of night to their arrival into the material light of day, and dissolution. Two figures walk out of the undergrowth of a night forest and traverse four distinct nocturnal environments. Along the way their bodies acquire an increasing intensity of light that ultimately obliterates their features just before they reach the sea at daybreak, where they disappear beneath the waves. The image sequence is projected onto a hanging screen suspended from above and viewable from both sides. Two channels of sound accompany the image.
Fire Woman (2005), is an image seen in the mind's eye of a dying man. According to Viola: "when the flames of passion and fever finally engulf the inner eye, when the realisation that desire's body will never be met blinds the seer, the reflecting surface is shattered and collapses into undulating wave patterns of pure light". A large projection installation on a vertical screen with five channels of sound, Fire Woman opens with a darkened silhouette of a female figure standing before a wall of flame. After several minutes, she moves forward, opens her arms, and falls into her own reflection, disappearing beneath the surface of the image.
Viola received his BFA in Experimental Studies from Syracuse University in 1973, and met Kira Perov, life-partner and long-term collaborator, in 1977. Since 1972 he has created videotapes, architectural video installations, sound environments, electronic music performances, works for television broadcast, and his writings have been widely published. He represented the U.S.A. at the 46th Venice Biennale in 1995 and in 1997 the Whitney Museum of American Art organised Bill Viola: A 25-Year Survey, an exhibition that travelled to six museums across Europe and the United States. His Passions exhibition organised by the J. Paul Getty Museum in 2003 travelled to major museums in Europe and Australia. Viola's works are in collections worldwide including the Centre Pompidou, the Tate Collection, and the Museum of Modern Art, New York. Bill Viola and Kira Perov live and work in Long Beach, California with their two children. LOVE/DEATH: The Tristan Project, will be accompanied by a major new book with contributions from art historian, David Anfam, art critic, Simon Grant and Bill Viola, and richly illustrated with photographs of the works by Kira Perov. Viola will give a lecture on 16 June at Tate Modern.
For further information, and images please contact: Calum Sutton Call +44 (0) 20 7495 5050 or email calum@haunchofvenison.com
www.haunchofvenison.com