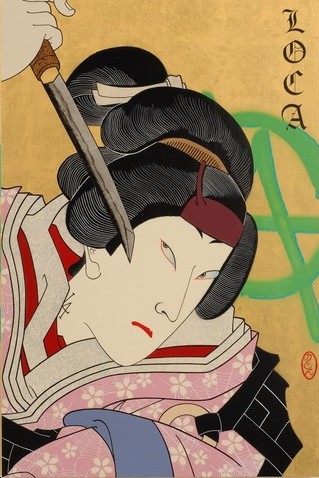 Japanese-American artist Gajin Fujita is to present a series of new panel paintings and works on paper in Pacific Tsunami, his first UK solo show at Haunch of Venison London.

As with traditional graffiti the works are produced in layers; semi-precious metals including white gold and gold leaf are applied to wooden panels. These are then obliterated with graffiti, spray-painted by the artist and his crew who contribute with their tags and bombs, more usually seen daubed over empty walls and adorning public transport throughout the city. Finally, a composition of stencilled figures, animals and motifs inspired by traditional Japanese Ukiyo-e imagery is laid over the top.

Dating back to the early 17th century, the woodblock imagery of Ukiyo-e sought to express an idealisation of contemporary urban life and typically depicts city life, featuring beautiful courtesans, bulky sumo wrestlers and actors. Fujita's stenciled and hand-drawn figures also relate directly to Shunga, a branch of Ukiyo-e which sought to express sexual desire, and some of the figures in Fujita's works brazenly present sexually explicit acts and pornographic imagery.

The stencils used in the works are most often fashioned by the artist, created from cut-out drawings that he makes on paper. Once the painting to which each is allied has been completed, Fujita continues to work on these studies to give them independent stature. The exhibition will include a selection of both small and large scale works on paper.

The exhibition will be accompanied by a catalogue with a text on the artist's new body of work from critic Pernilla Holmes. The exhibition, 'Las Vegas Diaspora: Emergence of Contemporary Art from the Neon Homeland' curated by Dave Hickey, includes work from Gajin Fujita, and is on view at the Laguna Art Museum until 1 June 2008.

Gajin Fujita (b. 1972) lives and works in LA, and graduated from the Otis College of Art + Design and the University of Nevada, Las Vegas, in 2000. Fujita's work has been featured in important group shows, including Beau Monde: Toward a Redeemed Cosmopolitanism, Site Santa Fe's 4th International Biennial, 2001; Casino 2001, Stedelijk Museum; 2001 Outlook International Exhibition, Athens, 2003; and Populence, Blaffer Gallery, Houston, Texas, 2005. Gajin Fujita was paired with Pablo Vargas Lugo in the exhibition 'Contemporary Projects 9' at the Los Angeles County Museum of Art, 2005-06 and had his first solo museum exhibition, entitled 'Zephyr: Paintings by Gajin Fujita' at the Kemper Museum of Contemporary Art in Kansas City, 2006.
www.haunchofvenison.com