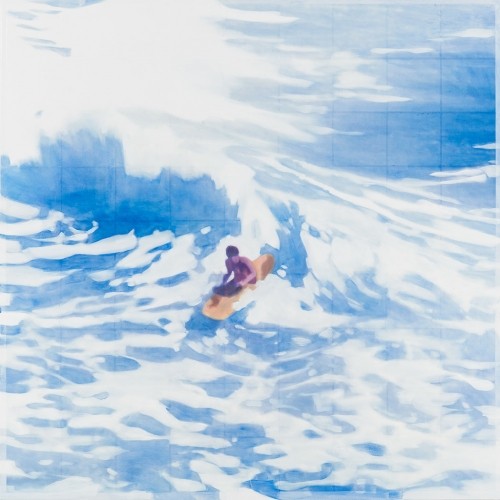 Haunch of Venison presents the first UK exhibition of American painter Isca Greenfield-Sanders. Second State is an exhibition of new work that explores the physical and metaphorical enormity of landscape, and the power of painting to convey the sublime.

Isca Greenfield-Sanders uses vintage slides as the starting point for her multi-layered paintings. The imagery is universally recognizable, culled from snapshots taken by amateur photographers. These paintings are unified by the large scale of their subject matter that ranges from a mountain peak to the swell of the ocean, from an aerial view of the landscape to the televised moment man landed on the moon.

Part of Greenfield-Sanders’ interest lies in how the amateur photograph fails to depict the magnitude of these subjects and how through the meticulous process of painting, enlarging and repainting each image, she can more powerfully depict the experience. Greenfield-Sanders used a photograph of an unknown mountain range marred by a lens flare as the starting point for Mountain Flare, 2012. It is an example of what she describes as “the cavernous gap between the majestic landscape and its photographic documentation.” The colour flare both gestures towards the presence of the photographer and enhances the composition. The bottom half of the painting is rendered abstractly in pure black, ultramarine blue and bright orange, while the top half of the painting is more photographic.

Moon Landing, 2012, is based on a photograph of a television screen as the moon landing was broadcast in 1969. The original photograph is out of focus and the subject is obscured by Moiré lines. Greenfield-Sanders says: “I am fascinated that the desire to capture such a remarkable historical event drove the photographer to shoot a black and white TV screen—such a beautiful and hopeless gesture.” The lunar landscape, seemingly viewed through a key hole, appears lit from within, rendered by the artist in shades of blue.

This exhibition presents new paintings that are a continuation of Greenfield-Sanders’ interest in the relationship between photography and painting as well as the transformative effect of scale and medium change in image making.

Isca Greenfield-Sanders graduated from Brown University in 2000 with a B.A. in Math and a B.A. in Visual Arts. She lives and works in New York. Her work is included in many private and public collections including The Guggenheim Museum in New York, the Brooklyn Museum, The Israel Museum and The Museum of Fine Arts, Houston. Her work was the subject of a two-person exhibition at the Museum Mosbroich in Leverkusen, Germany in 2006 and a solo exhibition at the Museum of Contemporary Art Denver in 2010.
www.haunchofvenison.com