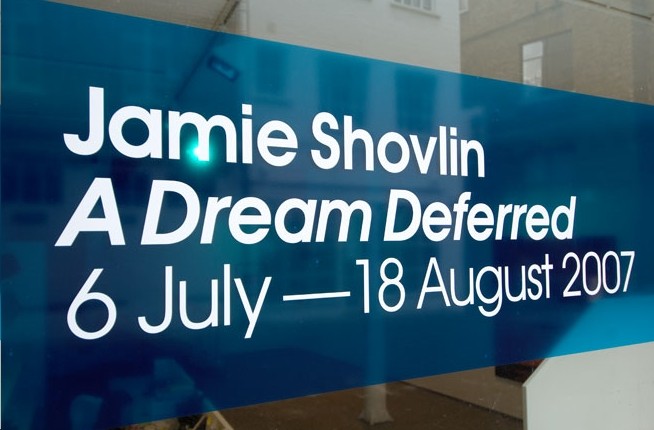 Jamie Shovlin (born 1978) is interested in the tension between truth and fiction, reality and invention, history and memory. He is an artist whose work combines extraordinary facility as a draughtsman, printmaker, painter and writer with conceptual complexity and playfulness. His painstakingly researched and executed works merge inherently flawed systems, pseudo-scientific exactitude and doubtful philosophical propositions with the seemingly objective experience of the archive. Through his projects Shovlin questions how information becomes authoritative and explores the way that we map and classify the world in order to understand it.

Shovlin's eagerly anticipated new work, 'A Dream Deferred', which will be shown at Haunch of Venison London in July 2007, is a subjective exploration of American history, politics and culture, taking as a framework his parents' record collections; the US-dominated soundtrack of his early life. The project includes paintings, drawings, prints, photographs and sculpture, as well as filmed interviews with his parents. A series of new large-scale paintings appropriate imagery from the covers of records by Bob Seeger, Hall & Oates and the Eagles but are painted using techniques associated with modern American masters such as Ellsworth Kelly, Kenneth Noland and Frank Stella. Taking these as his starting point Shovlin creates a complex web of allusion and association, mixing family history and autobiography with references to the 1968 Olympics (held in Mexico City and remembered for the notorious Black Panther salutes given on the medal podium by John Carlos and Tommie Smith), Woodstock, Sharon Tate and Charles Manson, Abbie Hoffman and Ted Kaczynski (aka the Unabomber), and drawing on a personal art history dominated by Robert Gober, Lawrence Weiner, Bruce Nauman, Felix Gonzalez-Torres, William Eggleston and Ed Ruscha. 'A Dream Deferred' presents a narrative of hope and disillusion. It represents a distanced view of America, filtered through music, art, movies and the arbitrary structures of the internet. Shovlin's title points to the ways in which the idealism of the 1960s (when his parents met) has been alternately compromised, delayed and abandoned; it suggests that the
www.haunchofvenison.com