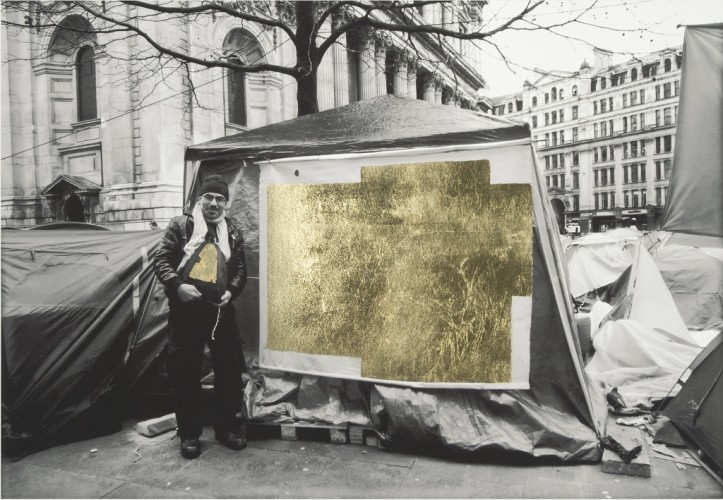 Glasgow-based artist Nathan Coley presents a new body of work that explores the ritualised nature of public protest and public mourning with a focus on the structures, spaces and paraphernalia used across the world. From placards and flags held aloft in demonstrations, to gravestones and shrines commissioned in memory of personal loss, and public monuments erected to honour events of national significance, each object is universally familiar and emotionally or politically loaded. The exhibition includes over thirty photographic and sculptural works on display throughout four gallery spaces.

The centrepiece of the exhibition is a large-scale illuminated text fastened to scaffolding spelling out the words ‘A Place Beyond Belief’. The piece is the fifth in a series of text works in which Coley appropriates phrases he has come across – through personal testimonies, literature and song lyrics - that resonate with an ongoing theme of his work: the relationship between public space and a sense of personal belonging. ‘A place beyond belief’ was the expression used by a New Yorker during a radio interview on the tenth anniversary of 9/11. She recalls an incident on the subway in the days following the World Trade Center attacks and used the phrase to communicate her hope for the future of the city and its inhabitants.

On display in the first and third gallery spaces are a group of photographs titled The Honour Series taken at sites where social, political or religious messages are conveyed - sometimes conspicuously, through the use of signs, and at others subliminally, via public monuments. Each black and white photograph is at points overlaid in gold leaf, traditionally applied as gilding to heighten the impact of an image or structure, in this instance it is used to conceal information within the image – the message on a placard or the details of a public monument and what it commemorates. Despite the range of beliefs advocated in these images, the series as a whole bears witness to the human need for self and collective expression.

In the third gallery is Choir, a sculptural work that consists of several objects abstracted from hand-held placards. Rendered in steel and painted white, their association with a specific cause has been removed. Presented on a table-top as a gathering of trophies they are reduced to just a sculptural form.

The upper gallery is filled with an installation of recycled gravestones and a series of wall-mounted drawings. On each of these funerary monuments, the name of the dead has been removed. The headstones are raised from the floor on metal supports and presented horizontally as though in transit to a new destination. Following from the public sculpture, In Memory, which Coley made for Jupiter ArtLand sculpture park, this work asks the viewer to imagine whose ‘dearly beloved’ may have been forgotten while providing a blank space for them to project a name of a loved one in its place. The framed drawings on the wall also incorporate texts from gravestones, these rubbings of the headstones replicate the full epitaph and dates of passing but with the name of the dead erased.

Across a range of media, the works in A Place Beyond Belief present and repeatedly obscure people’s public declarations, either by showing them out of context or by concealing key parts of their message. By blocking the conventional reading of these images, the viewer is forced to look to the surrounding environment and people’s gestures and clothes to speculate who these people are and what they are trying to say. The suggestion is of a world characterised by competing ideologies but linked by the means people use to proclaim them. Rather than a political broadcast, A Place Beyond Belief stresses the importance of faith, not in a strictly defined moral or religious code, but more generally, a faith in humanity in all its individual and collective guises.
www.haunchofvenison.com