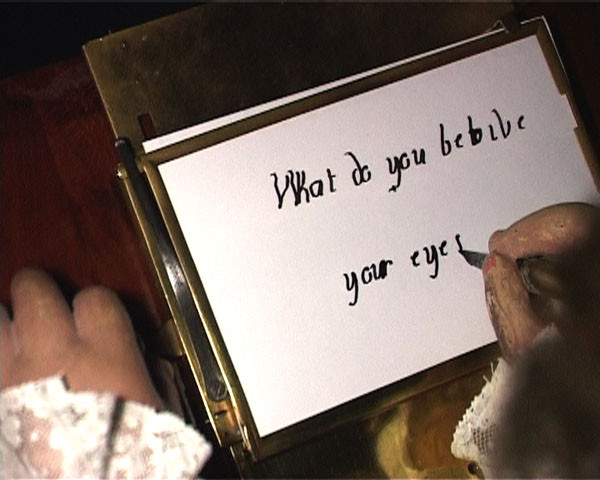 Philippe Parreno (born 1964) is an internationally acclaimed French artist whose work explores the different ways in which subjectivity moulds our experience of the real. Embracing a variety of media from the traditional (drawing, sculpture) to the more experimental (animation, ventriloquism, performance), Parreno consistently debunks the idea of a singular, authentic reality, instead exploring a number of different – but equally valid – perceptions of it.
Previous projects have examined this idea through the conflation of dramatically different perspectives. Co-directed with Douglas Gordon, 'Zidane: A 21st Century Portrait' (2006) featured seventeen cameras positioned at different points around a pitch and all trained on French football star Zinedine Zidane for the duration of a match against Villareal. The idea, in Parreno's words, was to make "a feature film which follows the main protagonist of a story, without telling the story." Other works such as the ongoing collaborative project 'No Ghost Just a Shell' (1999) – in which a Japanese manga character is liberated from the binds of intellectual copyright – have deliberately blurred reality and fiction in an effort to unsettle claims to objective experience.
Parreno is sceptical of constructed narratives or scenarios, preferring to create open-ended propositions which act as a challenge to the viewer to interrogate all that is put in front of them. He has said in the past that he is "more interested in proceedings than in resolutions". In this respect, his practice is defiantly non-linear, often eluding the possibility of simple categorisation as Hans Ulrich Obrist has noted: "When I try to sum up what, above all else, I have learned from grappling with the sprawling prolixities of Philippe Parreno's work, what I come up with is that his thought and practice is precisely impossible to summarise, a resistance to this very act."
This slipperiness of interpretation can, in part, be attributed to Parreno's preoccupation with the apprehension of ideas and images rather than the production of objects. But it is also the result of the central role played by collaboration in his work: Parreno's is a fundamentally dialogic practice in which concepts of authorship and the myth of the artist genius are deliberately diluted. Positioned as a leading exponent of Relational Aesthetics by French curator Nicolas Bourriaud, Parreno's recent collaborations have involved artists such as Pierre Huyghe, Liam Gillick, Douglas Gordon, Rirkrit Tiravanija, Dominique Gonzalez-Foerster and M/M (Paris).
Parreno lives and works in Paris. He has exhibited widely throughout Europe and has a number of important solo exhibitions planned for 2008, including at the Serpentine in London, the Kunsthalle Zürich, the Irish Museum of Modern Art, and the Walker Art Center. Parreno is also co-curating a group opera called Il Tempo del Postino with Hans Ulrich Obrist for the inaugural Manchester International Festival in July 2007. Showcasing international artists such as Matthew Barney, Olafur Eliasson and Carsten Höller, the opera is based around the idea of artists occupying a duration of time rather than an amount of space.
To view examples of the 'Speaking Drawing' works please download the Audio & Video file
www.haunchofvenison.com